Muyil, Mayan Ruins and Sian Ka’an Biosphere Reserve – a side trip from Tulum

Twenty-two kilometers south of Tulum is a remarkable link to Mayan ingenuity.
Muyil, located in a dense jungle setting, is an inland seaport connected to the Caribbean Sea by two man-made canals. Muyil is also known as Chunyaxché and still exists as a noteworthy testimonial to the engineering achievements of this remarkable Mayan civilization.
Muyil is a wonderful place to take a nature hike, mingle with tropical nature and witness some unusual examples of the Mayan advanced infrastructure that still exist within this archeological zone.
This is a big place so plan to do a lot of walking. To enjoy Muyil to its fullest, a half day of leisurely poking along will enhance your pleasurable experience immensely.

After a short ride from the bus station in Tulum, the Mayab bus will let you off near the entrance. It is only a short walk to visit El Castillo, one of the tallest Mayan ruins on the east coast of the Caribbean.

After a short ride from the bus station in Tulum, the Mayab bus will let you off near the entrance. It is only a short walk to visit El Castillo, one of the tallest Mayan ruins on the east coast of the Caribbean.
In the late 1950’s when this area was a territorial part of Mexico with literally no infrastructure and only accessible by a five day jungle horseback ride past the end of the railroad line from Mérida or by coastal sailing vessel from the Caribbean island of Cozumel.
Pablo Bush Romero led one of the first expeditions to this “Lost City of the Maya.”  In his book, Under the Waters of Mexico, he wrote about his remarkable adventure:


After about thirty minutes of navigating through the channel, we entered the impressive lake of Chunyaxché, a marvel of archaeologists specializing in Mayan civilization. Precisely at the mouth of the channel, on the left side, we discovered a temple of Xlabpak…
Let us go to Chunyaxché. After crossing the lake, with its exquisitely blue water, we went through another canal. After several hours of navigating on the canal, we arrived at Lake Muyil, which was wide and not very deep. After landing on the dilapidated pier, we started our exploration by walking along a trail through the jungle, which ended in a clearing where there were two small huts inhabited by natives…” 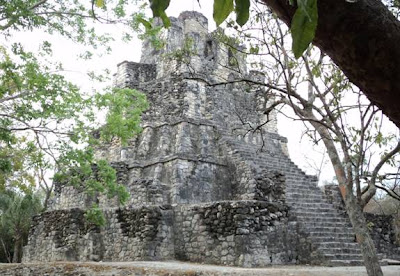 El Castillo
On your jungle walk you will see the seventeen meter or nearly sixty foot tall partially restored Mayan temple that has the significance of being an observation platform and signaling station. On the pinnacle of El Castillo is a platform that allows a view of the distant Caribbean Sea and all waterways linking it to Muyil. There is evidence that signal fires were built on its peak that may have been used to guide in the Mayan seafaring merchant vessels. Muyil began to populate by 300 B.C. This was centuries before such ancient Maya cities as Chichen Itza, Uxmal and Tulum.
Explorer Pablo Bush Romero describes in his book Under the Waters of Mexico what he and his colleagues encountered at Muyil’s El Castillo, a pyramind with steep steps and an oratory on top:


“Under one of these steps we found a tunnel which led to another temple situated in the heart of the pyramid. According to Segovia, this temple was dedicated to the high priests. Along the passage were a series of niches. We put our hands deep into each niche to see if there were any archeological relics. When we reached the most important one in the center of the tunnel, Alfonso Arnold, by chance or though some kind of intuition, thought to turn on his search light on first. He got such a scare that he recoiled almost as far as the front wall. Instead of archeological relics, what he saw there was a nest of deadly nauyaca or “sorda” or “four-nosed” snakes, the most poisonous in the Mexican paradise.
It was a good thing that we frightened a few of these serpents because if anybody’s hand had been bitten, it would have been necessary to resort to a primitive surgery technique of the “chicleros”.*  Since we carried no antidotes, this involved immediate amputation of the bitten limb with a machete without sterilization or anesthesia.”

Built with a purpose, El Castillo is but one of nearly a hundred structures erected on these premises. Muyil was on one of many Mayan trading routes. Though some distance from the sea, the Maya excavated straight canals, one of five kilometers in length and the other one kilometer cutting down into bedrock with nothing but hand tools to accomplish their enormous goal. This is a real seaport in the jungle.
Seagoing sailing freight canoes of the Chontal Maya from Tabasco plied these waters ranging from distant Vera Cruz, Cuba, Florida and Central America. The cumbersome sea salt from northern Yucatan could have only been transported by seagoing vessel. Other cargo items included cotton, cocoa, copper, dyes, fish, honey, jade, and more.
In this area the seagoing Maya with their trading canoes utilized natural inlets and beaches along this coast, such as Tulum ruins, Tankah, Akumal, Xaac, Paamul, Chakalal, Xel-Ha and Xcaret.  All of these landing ports had Maya temple ruins. 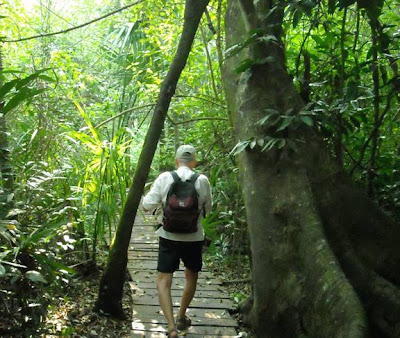 Leaving the area of El Castillo your next jaunt is through a canopy jungle on a boardwalk. This segment of your visit will take you a minimum of forty minutes. To get the very most pleasure out of the boardwalk, take your time to sniff the flowers and admire the exotic jungle trees.
If you are tempted to venture off of the walkway, remember the venomous snakes. The pit viper nauyaca is found in this lowland habitat.  Together with the rattlesnake it is the chief cause of snakebite in the Yucatan Peninsula of Mexico.

Midpoint on your boardwalk trip is an observation tower. 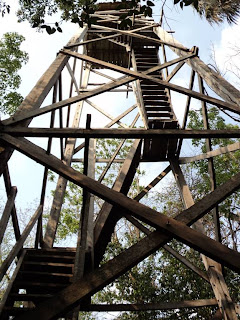 The observation tower offers a splendid view of the expansive surrounding jungle, lakes, lagoons, mangrove swamps and the distant Caribbean, but climb at your own risk. The steps are steep and are for the young and adventurous.


Muyil is under the jurisdiction of the federal agency INAH (Instituto Nacional de Antropología e Historia), but is partially within the Sian Ka`an Biosphere Reserve.

Emerging from the jungle boardwalk you will find yourself at a lovely beach on Muyil Lagoon where guided tours are available. Several different excursions are offered including traversing the ancient Mayan canal system. There is nothing like this anywhere. If nature is what you came to see, this is your place. Don’t miss your opportunity.

Strolling back from the lake you will find yourself on an ancient Mayan sacbe road that has remnants of pre-Columbian ornate stone carving.


Pablo Bush Romero exclaims in his book Under the Waters of Mexico: “What amazing road engineers the Maya’s were! I have traced from a helicopter one of those roads called “Sacbe” [white road] for over 100 kilometers. Undoubtedly, Tulum was the focal point of a coastal artery because every seven or eight kilometers there is a temple. The temples offered refuge to travelers, thus establishing centers of protection against cannibalistic Caribe Indians…”


The jungle diversity here is positively amazing. Your path around the Muyil Mayan ruins site gives you a look at the area’s range of topography. 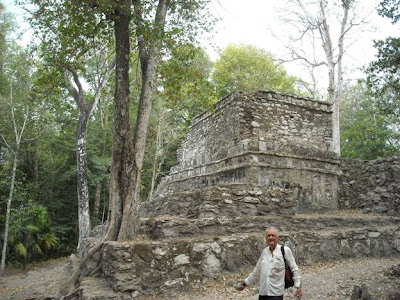 The jungle is literally full of temples in varying stages of restoration and degradation. Trees of considerable size have embedded themselves in the ancient structures. If unchecked, the trees with their invasive root systems will pull them all down. It has been over five hundred years that the jungle has had a free hand to do its destruction here and yet these structures stubbornly stand.

For the return trip to Tulum, walk out to the main road, then to the bus stop a short distance south of the entrance to Muyil ruins and wave down a bus or van (colectivo taxi) for the short trip back to Tulum. This side trip is recommended to all those who truly want more than just another tourist trap.

Recommended reading related to Muyil:
The Lost World of Quintana Roo by Michel Peissel
Under the Waters of Mexico by Pablo Bush Romero
Final Report: An Archaelogists Excavates his Past by Michael D. Coe
The Maya by Michael D. Coe

*Chiclero (sp) a gatherer of chicle.  Chicle is a gum from the latex of the sapodilla tree (zapote) used as the chief ingredient of chewing gum.
Copyright 2011 and 2012 John M. Grimsrud 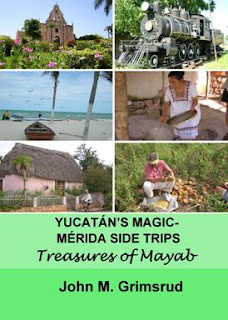 The book for traveling adventurers who want to see more than just trinket shops and crowded tourist traps has arrived: Our book—built one stone at a time like the Mayan pyramids.
Yucatán's Magic–Mérida Side Trips: Treasures of Mayab
Over a quarter of a century of inspired exploration and recording of our travels has led my wife and me to compile an impressive collection of outings that are the foundation for this book, built one story at a time. This isn’t a guide book but an idea book. It is something of another element not made to compete with guidebooks—it is made to complement them.