TELCHAQUILLO, PIXYA, SACBE CENOTE ROUTE, BIKE AND BUS DAY TRIP
by John M. Grimsrud
At six AM on December 14th Jane and I rolled out of our house with our little folding bicycles. We were headed for a downtown bus terminal and at six-thirty we were boarded and were progressing out of town headed for our first destination.
We didn’t realize it until we got off the bus at eight AM in downtown Telchaquillo that we had actually visited this sleepy little off the main road place more than twenty years earlier. 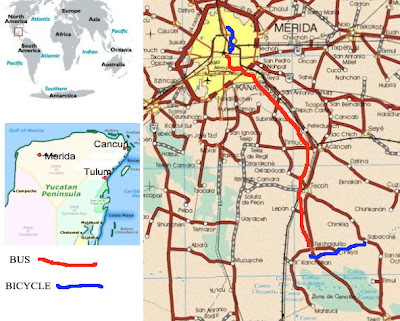 For orientation purposes you can easily find on the above maps the location of Yucatan, Mérida and our color coded bus and 40 kilometer bicycle day trip.

TELCHAQUILLO? This is definitely not a tourist crossroads with sophisticated glitter and glitz enticing advertisements beckoning visitors to hang out here. 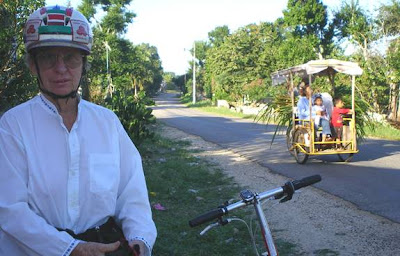 Early morning main street Telchaquillo with its conspicuous lack of motor vehicles beckons eco friendly bicyclers. Silently the above tricycle conveys mom, pop and the kids down the tranquil main roadway along with their load of sacate grass for cattle feed freshly cut from the nearby countryside. 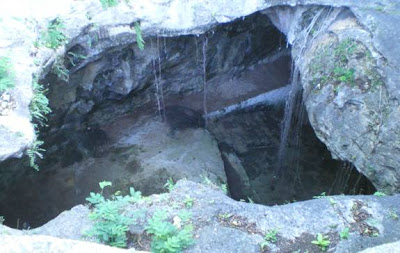 In the city zocalo or park is this rather deep cenote conveniently fitted with a staircase leading all the way down to water level eight meters below the surface. A low wall around the top keeps pedestrian mishaps to a minimum. Across the street from Telchaquillo’s dominative park is the modest unkempt no frills church that doesn’t even have a paved walkway to its front door. Even with the sad state of this impoverished impecunious little outpost some rag-tag carnival company has hauled in these shoddy amusement rides you can see above in order to ring a few centavos out of this hard pressed hardscrabble economy. 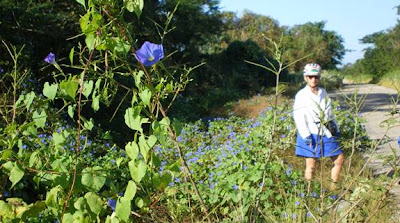 At a wide spot in this narrow silent little side road leading out of Telchaquillo, a profusion of brilliant blazing morning glories light up the wild jungle and are neatly color coordinated with Jane’s outfit. The little black seeds from these vines were used by the ancient Maya as psychedelic mind altering medicines. 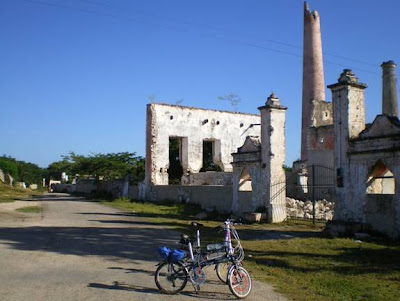 This is the end of the pavement at the seldom visited silent Mayan village of Pixya. (Pixya in Maya means “wounded knee” and is pronounced; peas-yah) The ancient neglected hacienda in the background has recently seen some meager renovations by the absentee landlord while the townsfolk scratch out of the surrounding jungle the most meager of livings that keeps them in a wretched state of poverty. To make maters worse the government neglects the education of the children who don’t even have a single computer in their school.

Biking east from little Pixya we picked up this voluntary guide who likes to raise sand with his spirited cross country hurried pace of bike riding. Armed with a machete and a 16 gauge single shot shotgun Manual Chable is always on the alert for wild game to feed his family. This scant low scrub jungle is vigorously harvested of its meager wood supply, leña used for home cooking because of the prohibitively high cost of LP gas.

The road is an ancient Mayan “sacbe” road in constant use over the centuries and was part of a system that united the prehispanic world of indigenous America together. Sacbe means white road in Maya and they were given this designation because of the fact that these thoroughfares were actually plastered with white pavement. The only structural presence on our five kilometer track across the sacbe road to the gruta-ruta cenote pavilion pictured below was a walled in cemetery. The ten by twenty meter cemetery compound spoke volumes about the impoverished inhabitants and reeked an unmistakable breath robbing stench of putrefying flesh that cut through the fresh flower scented air like a blast of foul malodorous death. 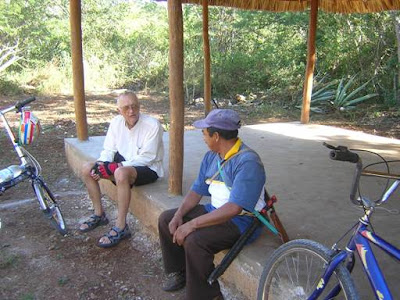 Confabulating with Manual Chable our Mayan jungle guide at the newly constructed palm thatched pavilion overlooking the cenote we visited the previous week but arriving from the opposite direction. I take a needed rest. 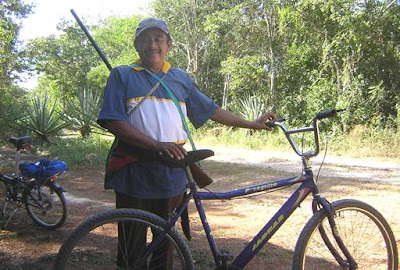 This is our guide Manual Chable with his no frills Mexican bicycle that includes a seat with no springs that will jolt your kidneys into a state of nonfunctioning on the sacbe roads. The spiky plants in the background are henequen and the entire state of Yucatan had been covered with them. Henequen was cultivated for its fiber used in the manufacture of sisal rope which is biodegradable. During the great world wars the production of this fiber made Yucatan the richest state in Mexico, then came man-made fibers and the industry collapsed. Recently the plants have come back into favor for the production of a tequila knock-off substitute.

This is one of two gates along the Mayan sacbe road enclosing a cattle ranch we traversed. Check out the size of the stones used in the stacked stone wall that is cheaper to construct than barbwire is to string in this land of slave labor wages. 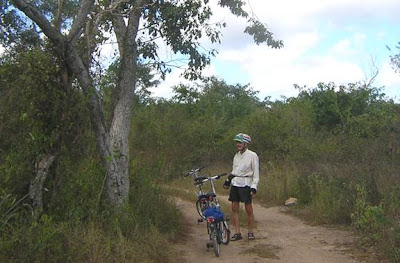 I followed a small jungle path off the road here and came across a ten meter deep cenote with dangerously steep stone walls that could easily trap an unobservant jungle stroller. 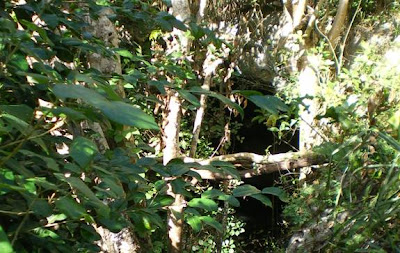 The black hole in the photo is the mouth of the cenote with its one-way steep slick stone sides and a pool of water at the bottom. If you fell into this cenote and managed to survive your fall your chances of rescue would be slim to none treading water and screaming for help in this sparsely populated place. 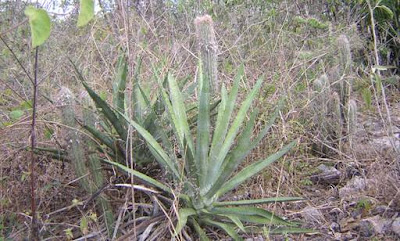 Nearly everything that survives in this semi-arid jungle scrub has spines and stickers like the cactus and henequen plants you see here along side the sacbe Mayan road. A kilometer out of Pixya on our return trip one of those spines punctured my tire. Luck was with us because the only motor vehicle we saw all morning materialized heading our way and transported me and my deflated tire into the little village of Pixya. 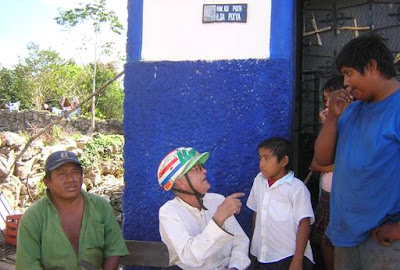 Here I am with my rescue team. This is the humble abode of the Ku Puch family.
When I asked what his name was the man with the cap said; “Ku” and the other fellow responded; Fernando. On the house address plaque the name was Ku Puch and the address merely stated Hacienda Pixya. In the small villages of Yucatan it is common for the home addresses to be designated as; “domicilio conocido” or “the house is known” 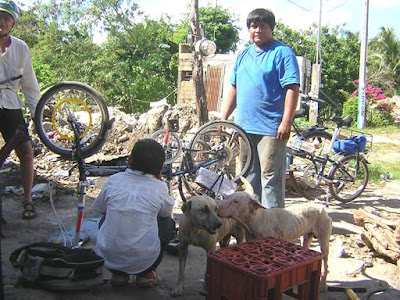 In the front yard of the Ku Puch family an amazing variety of curiosities are found. First it became a bicycle repair shop where a patch was applied to the spine puncture wound my tire had acquired. The rock barren yard is also the kitchen of the Ku family where they cook over an open wood fire using three stones and a refrigerator grate. Six mangy mutts of questionable pedigree struggled to rouse themselves when we all arrived slowly sauntered aside as the repair job got under way. Check out the electric service entrance fastened to the worm eaten wooden pole where the bare wires have no conduit protection and of course no ground wire…shockingly this all passes the local building code!
All of the heroic efforts to repair my bicycle tire were to no avail as the tire blew out after I had traveled less than one-hundred meters leaving the tube ruptured beyond further repair. We were all saddened by the turn of events.
I got a ride to Telchaquillo with another truck as Jane rode her bicycle behind and we searched the town for a replacement tube.
Plan “B” was to catch the bus back to Mérida, which we did and believe it or not visited six bicycle shops before I got a replacement tube.
(Mexico is notorious for its total lack of inventory control and often times stores will stock huge quantities of seldom used out-of-date merchandise and at the same time have nothing available in current high demand items.) 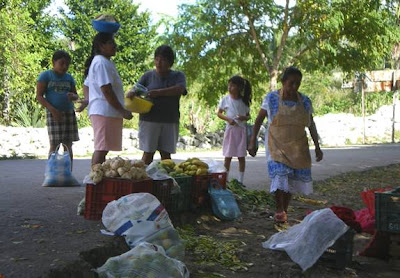 This is at the bus stop in Telchaquillo where we had no problem purchasing sufficient provisions to get us back home to Mérida.
Our little folding bicycles make public transportation wonderfully fun and easy because we can board any bus or colectivo taxi that comes along and they are frequent.
We have several other bicycle/ bus day trips out of Telchaquillo planned so stay tuned.

I LOVE visiting all these wonderful places with you guys! You are indeed intrepid warriors!

Have a GREAT Holiday! Where are we going next!