Two hour express bus service to Mérida and less then half an hour to Valladolid make the out of the tourist loop town of Tizimín an ideal staging place for several seldom visited delightful side trips, which include:
Panabá, San Felipe, Rio Lagartos, Las Coloradas and return.
Colonia Yucatán, El Cuyo, return or on to Las Coloradas via the beach road.
Ek Balam to Valladolid and a lovely seldom traveled back road to Panabá, Santa Rosa, Yalsihón, Yashilón and on to Dzilám de Bravo, the old pirate strong hold.
Nearly all the above side trips can be made by bus/bike and/or car. 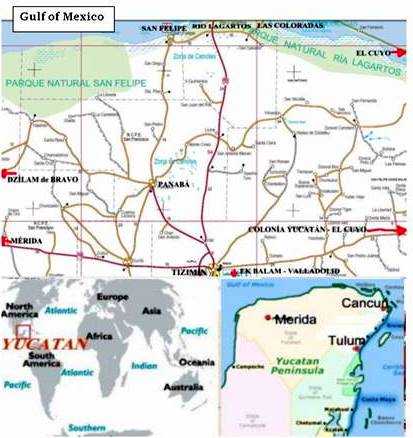 A look at Tizimín
Tizimín’s location is extraordinary with excellent eating options and diverse choices in accommodations.
We are no strangers to this one-of-a-kind getaway town. It is linked to Gulf Coast fishing villages, cenotes, plus ecological and biosphere reserves and situated in Yucatán’s only true cowboy country.
Tizimín with a population of 46,971 (2010 census) is the second largest city in eastern Yucatán. Tizimín, whose Mayan name means place of the tapir, is a quiet easy going and friendly town central to the many dairy farms and cattle ranches in the area. 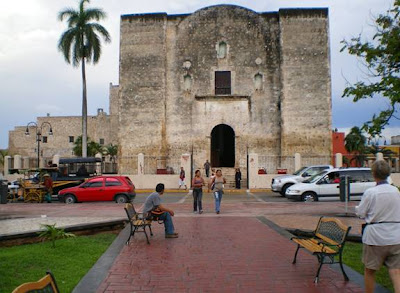 In the center of the city is the 16th century Parroquia Los Santos Reyes de Tizimín (Church of the Three Kings) and its former Franciscan monastery. They are worth a visit.
The church is outwardly spartan, but inwardly mammoth and ornately adorned with interesting gilded statuary, the most impressive being the glass case containing the three kings or Los Santos Reyes de Tizimín.   Three Kings Day is celebrated on January 6 of every year in Mexico.  In Tizimín the celebration is a fair and festival that last over a week and starts the end of December.
The clean and well maintained municipal market on Calle 47 has a large food court featuring a wholesome variety of local specialty foods.  Nights the parks have a wonderful selection of street venders selling Mexican traditional foods that include a wide variety of exquisite tamales.
The area is prosperous and growing rapidly. Bus and taxi service is excellent to Valladolid, Mérida and area towns.
Biking north and east of Tizimín is best in early mornings with the offshore sea breeze. Easterly mid morning onshore winds build through the afternoon. Take advantage of these winds and put the sun on your back with a tail wind.

History at a glance: Looking Back
In the book Incidents of Travel in Yucatan published 1842, the author, John Stephens, listed the following as export items from Tizimín:
Tortoise shell, skins, timber, logwood, India-rubber, incense, tobacco, achiote (a substitute for saffron and a very rich dye), starch from the yuca, cotton, wax, honey, molasses, sugar, rum, castor oil, salt, amber, vanilla, hogs, and cochineal.
According to British Admiralty charts from that time the northern coastal area of Yucatán was densely forested with 70 feet tall mahogany and zapote trees harvested for rubber. That solid forest survived over three hundred years of Spanish occupation but would not survive another century. The tropical timber completely vanished into a lumber mill at nearby Colonia Yucatán. Today the timber has been replaced by dairy farming and cattle ranching. 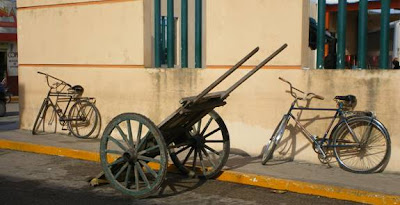 This photo was taken alongside the Tizimín bus terminal and reflects a pace from the past century. First and second class buses are here in the city center. There are two terminals, Autobuses del Noreste located on the corner of Calle 47 with Calle 46 and ADO located next door on Calle 46 between Calle 47 and 45. 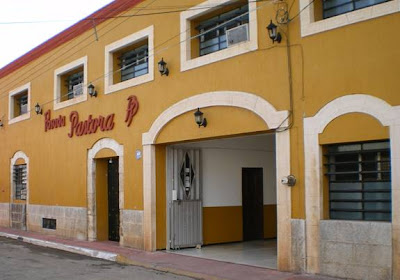 Off street parking, bicycle friendly and less than two blocks from the bus terminal and main market make Posada Pastora located on Calle 51 between Calle 52 and 54 a quiet and pleasant lodging. With a ground floor room you can wheel your bicycle right in from off the street.

Side Trips from Tizimín

Tizimín north to the Gulf of Mexico with a layover in Rio Lagartos
A layover of two or three days on this quiet loop trip to the Gulf of Mexico makes it better.
This trip can be made by bike or bus.  If you wish to bike and  have time constraints or prefer a more leisurely trip, take the bus from Tizimín to Panabá and then bike the 30 kilometers to San Felipe.  Spend a night in a San Felipe hotel or take a swim and then bike on another 12 km to Rio Lagartos. Another consideration is to get an early start on your bike before the onshore sea breeze that begins near ten a.m. This wind can be used to your advantage when returning from Rio Lagartos where you will want to spend at least one night.  To return to Tizimín you can take the bus or bike the 56 kilometers.

Rio Lagartos
Rio Lagartos is a coastal tourist fishing village 56 km north of Tizimín, 95 km north of Valladolid and 230 km from Mérida. The name implies river of alligators but there are no rivers in Yucatán only alligators. Situated within the nearly 150,000 acre Ria Lagartos Biosphere Reserve, the topography is low coastal scrub, mangrove marshes, lagoons, sand spit barrier islands and sandy beaches. Guided boat tours include lagoon trips, flamingo watching, seasonal migrating birds and sea turtle observations. Guides speak Spanish, English and Italian. A variety of hotels can be found in Rio Lagartos ranging from the lovely bay front Villa de Pescadores to basic accommodations.
Mayan regional foods can be found in the early morning in the central public market. Several seafood restaurants are open from midday and mom and pop pizza and taco stands open evenings.
From Rio Lagartos there is taxi and bus service to San Felipe, Tizimín and Valladolid. To the west of Rio Lagartos is the fishing village of San Felipe and to the east is the village of Las Coloradas where salt has been harvested by the Maya for thousands of years and continues to the present day. 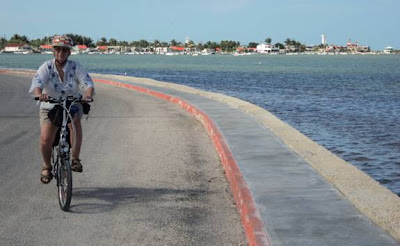 The lovely bay front street in Rio Lagartos traverses from the lighthouse on the west end of town to the east end of town where there is an ojo de agua or artesian spring that is surrounded by a public bathing beach and park. 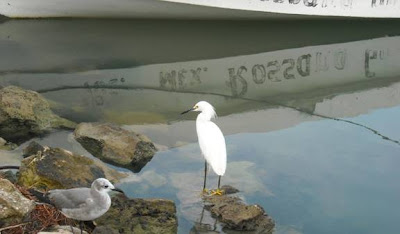 This coastal area is a bird watchers paradise. The photo was taken in front of our little waterfront cabin downtown. 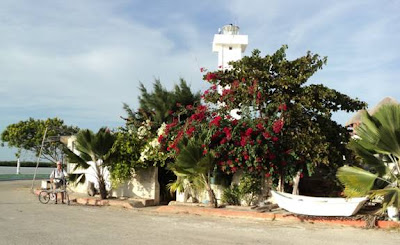 Tropical flowers, fishing boats and the light house make the waterfront of Rio Lagartos a place for photo-ops. 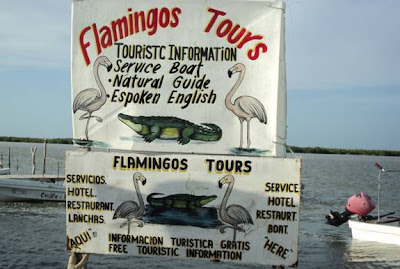 A tour to see the flamingos is well worth the time it takes. There is no shortage of tourist guides and all newcomers are soon approached. A tip; if you can get a group of four or five the price of these boat tours can be split for a substantial savings.

Tizimín to Ek Balam and on to Valladolid 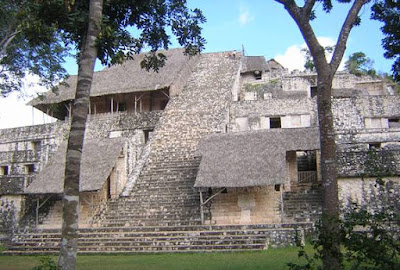 If you have time constraints and want to beat the crowds to Ek Balam consider taking the bus from Tizimín to Ek Balam.  After visiting the ruins bike to Santa Rita and on to Temozón for lunch before finishing at Valladolid.    For more information see: Valladolid, Uayma and Ek Balam.

Tizimín to Colonia Yucatán and El Cuyo:
Take the bus from Tizimín to Colonia Yucatán and then El Cuyo or bike the last 38 kilometer stretch to El Cuyo from Colonia Yucatán.  It is one of the loveliest areas for a bicycle trip…this rural Yucatán road is best done early morning. If you feel adventurous, after you spend at least a night in El Cuyo, bicycle the dirt 50 kilometer beach road west to Rio Lagartos passing Las Coloradas. Be warned: There are no facilities along the beach front dirt road.

This rip-rap causeway was constructed across the lagoon leading into El Cuyo from materials salvaged from an ancient Mayan temple. 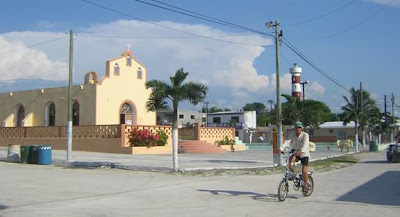 John biking down the main street of El Cuyo.

El Cuyo is a small isolated fishing village of 1,750 inhabitants with a seasonal tourist trade.  It is located 220 kilometers ENE of Mérida on the Gulf of Mexico. It is a beautiful bird watching area abundant in flamingos and over 250 species of other marine birds. An imposing light house is perched atop the ruins of an ancient Mayan temple. Five other Mayan ruins were salvaged to build a causeway and the town. Bus service south to Colonia Yucatán is available with links on to Tizimín, Valladolid and Mérida.  For more information see:  Colonia Yucatan and El Cuyo.

Las Coloradas
Las Coloradas with a population of about 1,000 is a coastal fishing village in north central Yucatán within the Biosphere Reserve of Ria Lagartos. The topography consists of a unique coastal ecosystem of mangroves, dunes and lagoons that is semi-arid making it ideal for solar dehydrating sea salt. Sea salt production has been done here since ancient Mayan times when huge trading canoes transported this heavy product to ports as distant as Central America, Florida and Veracruz. Today that production continues and the product is loaded into trucks, ships and railway cars.  Las Coloradas can be reached by bus from Tizimín and Rio Lagartos.  There are accommodations at nearby Rio Lagartos. Bicycling is good with limited but quiet roads.

Tizimín to Dzilam de Bravo
Biking the 107 kilometer seldom traveled rural back road takes you to Panabá, Santa Rosa, Yalsihón, Yashilón and on to Dzilám de Bravo, the old pirate strong hold. Be warned; Dzilám de Bravo does not have decent overnight accommodations but is an interesting fishing village proud of its link to the pirate Lafitte. There is a bay front monument to the pirate.
The nearby town of Dzilam Gonzalez has bus service to Tizimin.  There are several buses a day from Dzilam de Bravo to Mérida.
For more information see Yucatan’s Pirates.

Leaving Tizimín
Tizimín Bus Terminals
Autobuses del Noreste Terminal
Calle 47 on the corner with Calle 46
First class and second bus service to Mérida and points in between. There is also service to Cancun and Tulum.
This is where you get the second class bus to San Felipe and Rio Lagartos. 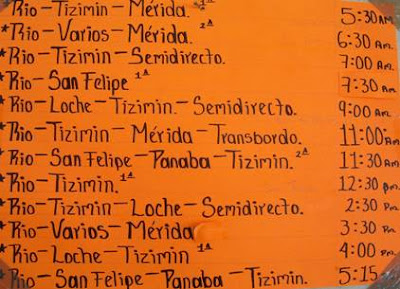 Links to places to visit near Tizimín:
Rio Lagartos, Yucatan 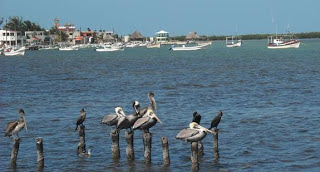 Rio Lagartos is a picturesque coastal fishing village on Yucatan’s Gulf Coast 95 kilometers north of Valladolid, 46 km from Tizimín, and 230 km from Mérida, Yucatan.  The name, Rio Lagartos, implies river of alligators, but there are no rivers in Yucatan. This is a bay or ciénaga protected by a barrier island. There are, however, lots of alligators and crocodiles. Read more: Rio Lagartos 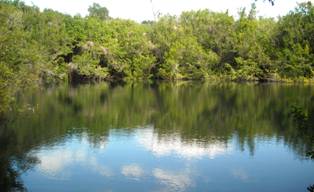 On the infrequently traveled road from Rio Lagartos to Las Coloradas between kilometer 8 and 9 there is a culvert and nearby a small, difficult to see sign denoting 50 meters to the entrance. If you are looking for the perfect unspoiled jungle getaway with no tour buses or trinket shops this is for you.
Read more: Sendero Peten Tucha 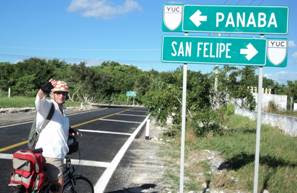 In spite of the modern road you see here that links Rio Lagartos to San Felipe the traffic is nearly nonexistent. It makes a particularly nice bicycle ride especially in early mornings with the sun and wind at your back. Read more; San Felipe

Yucatán has thousands of magical places to discover and explore.  For an insight into the places that tourists miss most in Yucatán, a new book is available. Finally the book for traveling adventurers who want to see more than just trinket shops and crowded tourist traps has arrived: Our book—built one stone at a time like the Mayan pyramids.
Yucatán's Magic–Mérida Side Trips: Treasures of Mayab
Over a quarter of a century of inspired exploration and recording of our travels has led my wife and me to
compile an impressive collection of outings that are the foundation for this book, built one story at a time.
This isn’t a guide book but an idea book. It is something of another element not made to compete
with guidebooks—it is made to complement them.

Available from Amazon in paperback or Kindle editions.  Also available for Nook, EPUB and in the iBookstore for iPod and iPad.