Today, living in Mexico's Yucatan, they travel mostly by bike 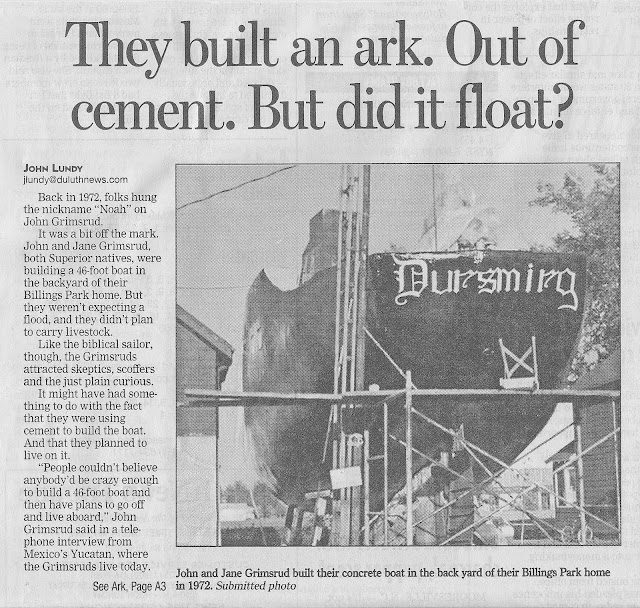 This article by John Lundy appeared on the front page of  Duluth News Tribune, today, June 4, 2010.


Back in 1972, folks hung the nickname “Noah” on John Grimsrud.
It was a bit off the mark. John and Jane Grimsrud, both Superior natives, were building a 46-foot boat in the backyard of their Billings Park home. But they weren’t expecting a flood, and they didn’t plan to carry livestock.
Like the biblical sailor, though, the Grimsruds attracted skeptics, scoffers and the just plain curious.
It might have had something to do with the fact that they were using cement to build the boat. And that they planned to live on it.
“People couldn’t believe anybody’d be crazy enough to build a 46-foot boat and then have plans to go off and live aboard,” John Grimsrud said in a telephone interview from Mexico’s Yucatan, where the Grimsruds live today. “Two ladies came by in a car one day and wanted to report us to somebody because they thought we must be absolutely nuts to be going to live on a boat.”
John Williams, who lived next door and still lives in the same house on Wyoming Avenue, didn’t think the Grimsruds were crazy.
“No,” Williams said on Thursday. “A lot of people did, but I knew the guy. The man was very clever.”
His daughter, Julie Williams Le Bard, remembers the boat growing in the backyard between their houses. “That was the biggest thing in my childhood,” she said. “We talk about this all the time.”
It took three years for the Grimsruds, with help from the Williamses and others, to build the boat. They learned about building with cement — they’re called ferro-cement boats, or ferroboats — in a boating magazine.
“It is quite reasonable to build, but it’s very labor-intensive to build these things,” Grimsrud said. “We built everything. We … made all of our own fittings and we put the hull together ourselves.”
The Grimsruds called their boat the Dursmirg — Grimsrud spelled backwards. While they were building the boat, the Grimsruds also took classes from the Duluth Power Squadron to learn the ins and outs of boating.
Suffice it to say, there was interest when the Grimsruds launched their boat on June 22, 1972, from the Superior Shipyard. Barney Barstow, who was part owner of the shipyard, urged the Grimsruds to launch their 20-ton boat in a place that wouldn’t make it a navigational hazard when it sank.
“Over 2,000 people showed up to witness the sinking,” Grimsrud said. “And a lot of people were disappointed, I think (that it didn’t sink), because the wagering was pretty heavy.”
Not only did the boat float, but John and Jane Grimsrud lived on it for the next 15 years, traveling across the Great Lakes, to New York City and to the Florida Keys. They’ve written about their adventures at length. Their “Travels of Dursmirg” runs to four volumes, with the first two volumes available at Amazon.com

.
John and Jane were 32 and 28, respectively, when they began their voyage. John Grimsrud was in the wholesale grocery business, and they were debt-free by the time he was 28, he said. Every spare dollar went either into the boat or into the bank. Once they launched, there wasn’t much overhead, he said. They never considered turning back, although one time during a bad storm on Lake Superior they returned to port.
The Grimsruds continue to travel today, but now they do it by bicycle. They have a website devoted to bicycling the Yucatan. “Now I am 69 and Jane 65 and still dreaming,” Grimsrud said.
And what of the Dursmirg? They sold it to a London stock broker who in turn sold it to a Canadian veterinarian. The Grimsruds don’t know where it is now. 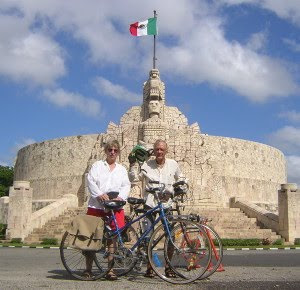 All three books are now available on Amazon.
Travels of Dursmirg, Volume 1

Travels of Dursmirg V-3, Volume 3, Down in the Florida Keys