TIXHUALACTÚN – SIDE TRIP FROM VALLADOLID

This off the beaten path and almost suburb of Valladolid is in no way tourist oriented, but has the unique feature of having been totally overlooked and bypassed.
Just a seven kilometer bicycle ride from the central plaza, first going south to calle 49 in Valladolid, then east on that street though a slightly downtrodden neighborhood past several schools you are on your way. Then where the street meanders into the woods and meets a slightly busier roadway you turn east and you get to enjoy rural outback Yucatán. (You can rent a bike from MexiGO bike rentals and tours in downtown Valladolid.) 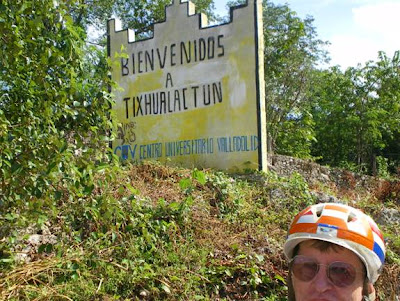 The above roadway sign greets your entrance to the little slice of nowhere… known as Tixhualactún, “the town tourists miss most”. 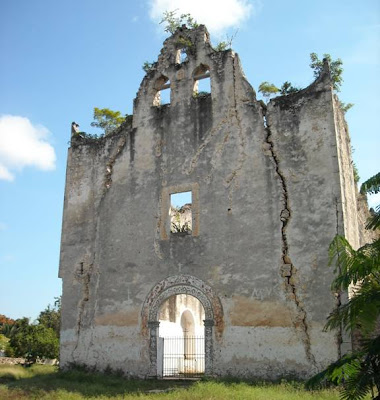 The most striking feature when you enter Tixhualactún situated on the quiet as a ghost town central plaza is the huge crumbling old church, La Iglesia del Santo Cristo de la Exaltación or The Church of Saint Christ of the Exultation. 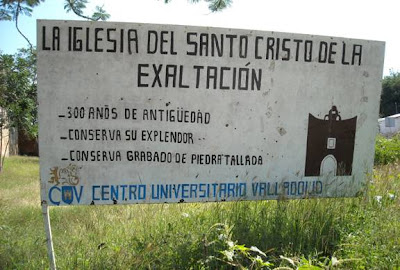 As the falling down information sign states; the church is three hundred years old, you should conserve its splendor and don’t take away any of the building stones. 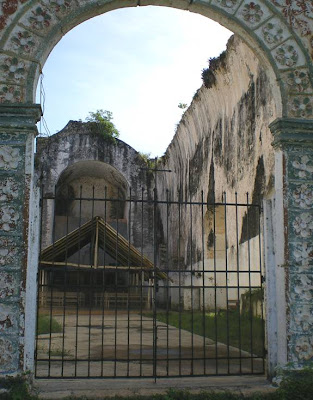 In a state of nearly total neglect for the past three hundred years the stacked stone, mamposteria structure has lost its massive roof to a cave-in and the walls are in the process of taking departure in different directions headed from the vertical to horizontal.
Outwardly you could easily assume that this three century crumbling structure was totally abandoned, not so, it is actually still functional to a degree.
An interesting thought to contemplate is the reality that the Spanish conquistadors were actually re-cyclers.
All of the building materials used to build this old church and the entire community for that matter were in fact re-cycled from a previous Mayan temple standing here. 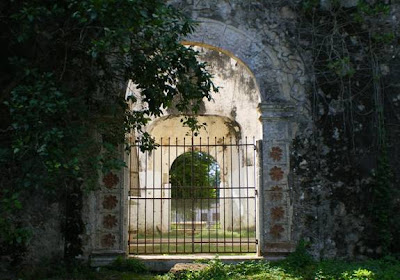 The walk of a few steps from the central plaza to this still ornately adorned entry door of the church is on a dirt path lined with knee high clingy weeds.
Peering into the church you are in for several surprises.
First the most striking feature of all is that the entire roof has completely vanished and the sky is the limit so a glimpse of heaven is afforded.
Next the inner walls devoid of paint are starkly bleak and darkly blotched by mold interspersed with occasional outcroppings of rank vegetation. 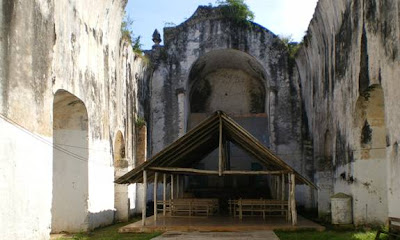 A tiny persistence of faith is evident here within the open air nave where a tin roofed pole shed sits before the sanctuary altar surrounded by green grass and vacant walls. 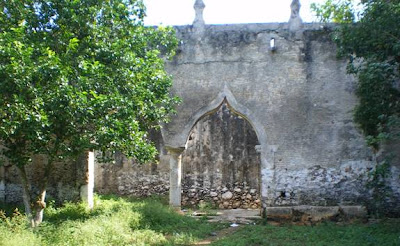 A radiant beauty of glorious days in centuries gone by still catches the eye when viewing the ornately adorned arched entry way that seems to capture your spirit.

The Spanish conquistadors overran and expelled the Moors from Spain but also took their trademark architectural designs to the Americas as you can clearly see here in the ogee arch and Moorish pillars of the church cloister.
The mystery here is just what led this particular community that originally erected the monumental church to sink into three hundred years of apathy. 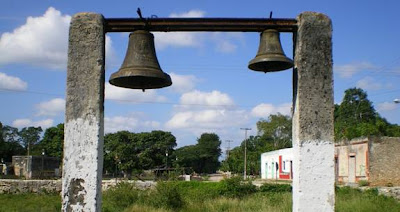 You are looking at downtown Tixhualactún and its silent central plaza and business district.
Though the old church crumbled and its bells fell to earth as you can see they have been resurrected to call in the faithful.

No tour buses or hoards of street venders hawking their hand crafts to camera snapping sightseeing visitors will be found here which in itself makes a little side trip like this well worth while.

Wait! There is more to Tixhualactún. Adjacent to the main plaza is a cenote, in Maya Dzonot. The cenote, a type of sink-hole, that here is in the limestone bedrock actually has flowing water. The water level in the cenote would be at the same level of area wells which is the water table, about eighteen meters down. 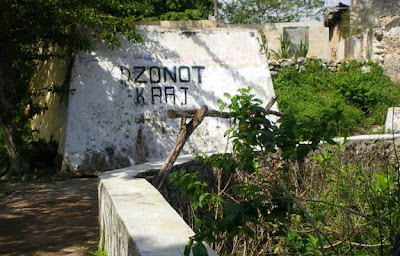 Well, Jane and I were treated to a strange display that continued all the time we were there. Huge flocks of bats were swarming, screeching and circling at a hurried pace around and around within the cenote and we were lucky enough to capture this event in a video.
This little girl came to greet us to Tixhualactún on her bicycle that she had received from the government at her school. She was talkative, inquisitive and full of town facts…a pleasant welcoming committee of one. 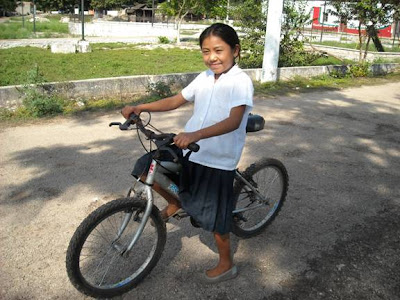 Dzonot Kaaj - Cenote Kaaj
Tixhualahtún
It was an incredible experience to view the bats flying in this cenote in the quiet village of Tixhualahtún.