TECOH, ANOTHER BACK COUNTRY DAY-TRIP IN YUCATAN
Jane and I have been making a point to take at least one adventure excursion of exploration in Yucatan each week by bus, bicycle and occasionally just bike or bus.
We looked at the map and decided that Mani a Mayan village continuously inhabited for the past 4,000 years would be our next day-trip adventure.
We had the bus schedule and would take departure at 8:30AM from the downtown terminal at Calle 50 x 67 where the brand-x buses leave from.
A couple of friends eagerly wanted to join us and we were all early to converge at the terminal.
Jane and I were first to arrive and went to buy our tickets. Surprise! Our 8:30 bus to Mani wouldn’t leave until 9:30.
Plan “B”;
Next bus out!
The decision was unanimously made with our adventuresome foursome…get our tickets and ride to the end of the line…wherever that might be.
So, at 8:10 AM Jane and I plus our daring risk-taking traveling companion friends Maria Laur and Thalia Doerzbecker were rolling second class out of town…destination Tecoh?
Where in the world was Tecoh?
We got out our map to find out where our adventure bus would dump us.
What a pleasant surprise!
It turns out that Jane and I had passed through quaint little Tecoh countless times and always commented that this was a place we both had secretly desired to explore.
We said; “Some day we will have to come and explore this uniquely interesting place not mentioned in any tourist tracts”.
We bounced along through serene Mayan villages and past ancient haciendas picking up and discharging smiling friendly inhabitants of these neat little clean rural communities filled with chirping birds and flowering shade trees.
It was another pleasant Yucatan morning in this dominative charming nearly never visited gem called Tecoh that greeted us with its peaceful passive streets abounding with unrushed bicycles, tricycle taxis and pedestrians on foot.
Tecoh was literally a breath of fresh air with its conspicuous lack of motor vehicles.
To merely say the place was serene would be a gross understatement…it was a step back into time long ago forgotten and passed over by the go-fast gas-guzzling yuppie class.
We had found a true treasure and a real jewel in Tecoh.
This seemingly tranquil little town had a central plaza more than two blocks long with a church from early colonial times prominently placed upon the north side.
The old church is sitting upon the remains of a gigantic former Mayan temple in a seeming attempt to silence the gods of old that the indigenous Mayan so proudly cherished.
Adjacent to the colonial gray stone church was a soccer field sport park and next to that an inviting tree shrouded park with a public area. This is where a traveling carnival was busily assembling its very home-made kiddy rides that were resurrected from long dead junked-out automobiles and such. All this was within the central park or “zócalo”.
The quiet ambiance and sparklingly clean and clear air we felt immediately purged our bodies and souls of Merida’s big-city hustle and bustle.
We disembarked our bus on the south side of the zócalo…this was the end of the line and it was 9:20 AM.
Our foursome instinctively meandered around over to the south side of the zócalo that was in the shadowy shade of the intense tropical sun.
Another thing that was conspicuous about Tecoh was its immaculate cleanliness in every detail. I can remember back some 30 years when Merida was clean and quiet like Tecoh still is today.
On the shady south side of the zócalo along with numerous small businesses is located the brightly and neatly painted two story municipal building gleaming rosy-buff with white trim.
This was our first stop.
We naturally meandered into the open arched foyer with its mirror polished ornately adorned French Colonial floor tiles that dated back 150 years to the Emperor of Mexico, Maximilian.
It was a pleasant surprise to be the only tourists in town. Tecoh’s town-folk were all so happy and eager to greet us with big friendly welcoming cordial smiles. 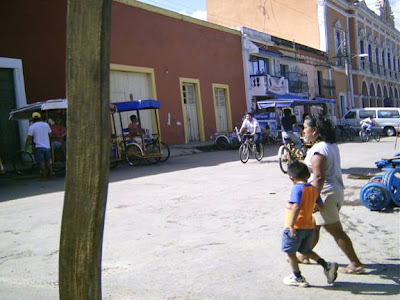 This is the shady side of the zócalo with the municipal building at right. We, like the Yucatecans, get all the sun we want by accident and instinctively head for the shade 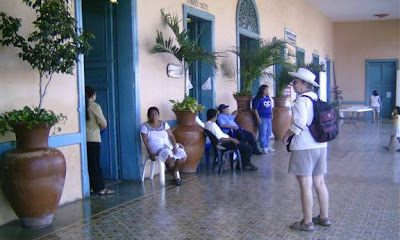 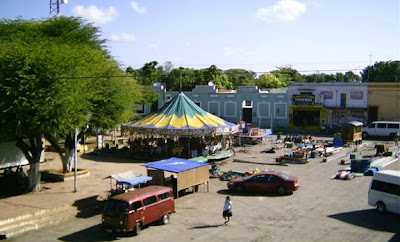 Here is the view from Tecoh’s municipal building second floor balcony looking over the south side of the zócalo. 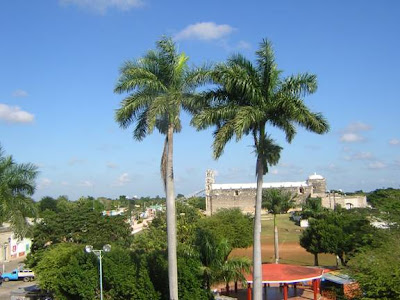 This is the view from Tecoh’s municipal building roof top looking north across the zócalo to the old colonial church perched upon the base of a former Mayan temple with the tree shrouded park in the foreground. 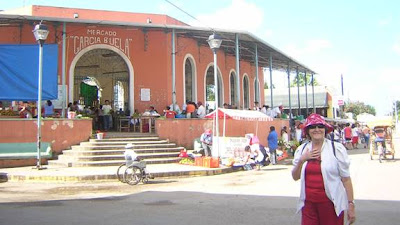 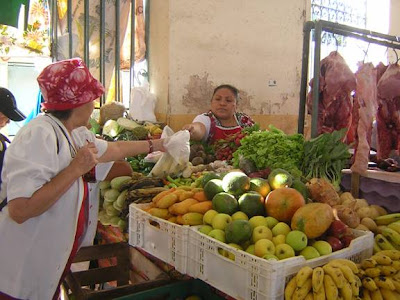 Inside Tecoh’s mercado Maria selects fresh fruits for our AM park picnic. 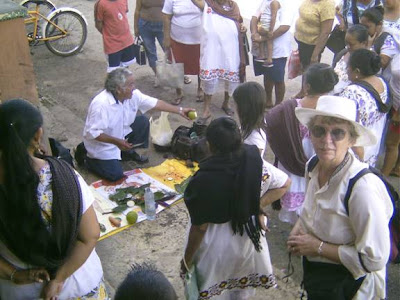 At the mercado is the medicine man. He has the eager audience captivated into psychosomatic ailments that he will cure with his secret herbs and mystic potions. Jane is at right for the photo-op. Note; the typical “huipil” native dress of the Mayan ladies. 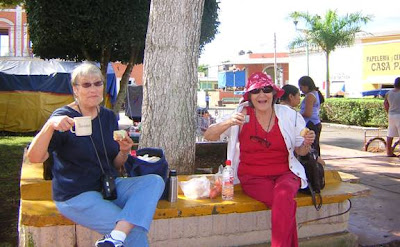 Our adventuresome traveling companions Thalia Doerzbacher and Maria Laur enjoying some of our purchases from the mercado at coffee break time at our zócalo park picnic. 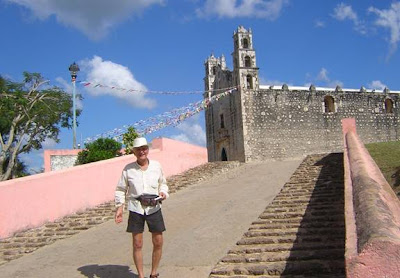 The climb up the base of the ancient Mayan temple to the old colonial Spanish church still speaks volumes of the thousands of years of Mayan culture trumped by the conquistadors who have ruled for nearly 500 years now. 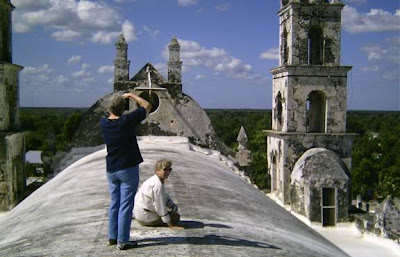 More photo-ops from the top of the centuries old colonial church where the view is awesomely spectacular. 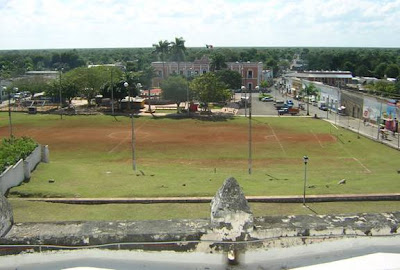 View looking across the zócalo park toward the municipal palace from the top of the old church at the quiet little unrushed town of Tecoh. 500 years ago this view from this very spot would have been from the peak of a Mayan temple. 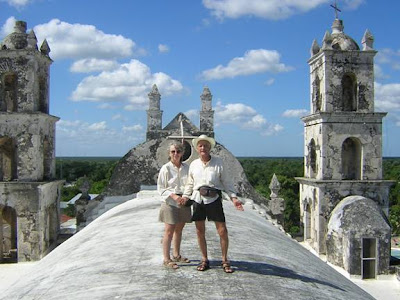 Jane and John atop the church at Tecoh under the powerful tropical Yucatan skies. 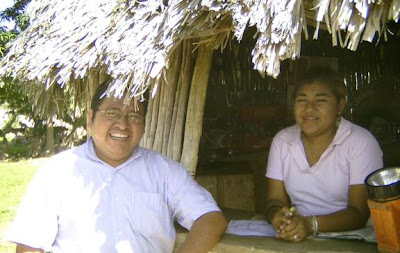 The director of tourism for Tecoh Javier Francisco Acosta Carrillo the official “director of turismo” who is promoting a 25 kilometer off-road bicycle trail that visits 13 cenotes and caves. Caves are known here as grutas. The route begins and ends at Tecoh. I told him it should be named “The Gruta Ruta”. Below Javier commuting around town by bicycle…this is bicycle country. 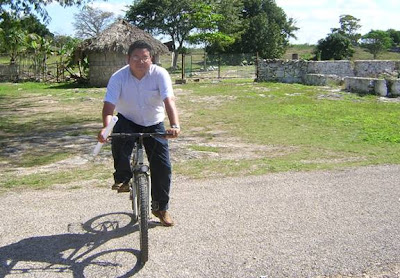 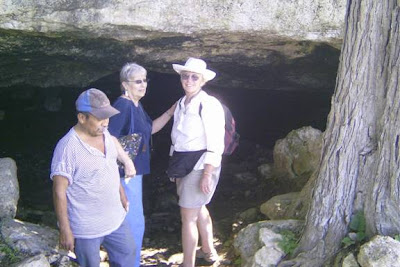 Thalia and Jane entering the one of many area caves, (grutas).

Tecoh’s bicycle busy streets are quiet and have almost no obnoxious auto emissions. 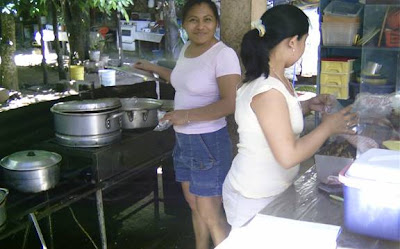 This is the friendly open-air kitchen at our lunch stop after our tricycle taxi city tour. 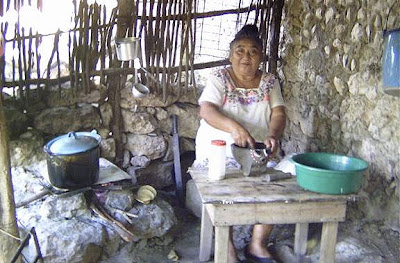 At our restaurant known as a “cocina economica” this lady grinds hot chili peppers in a “molcajete” as she prepares lunch over a wood fire in the traditional style of the indigenous. Our meal was sumptuously superb and the quantity amply generous. 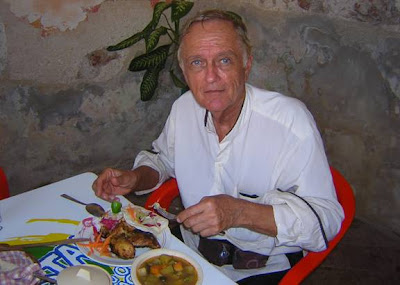 Our adventuresome little group was on our way back to Merida by 3 PM.
We wouldn’t miss the stimulating fun-filled experience of riding the slow local bus out of town visiting many quaint villages along quiet local roads. But we enjoyed a quick return trip to Merida aboard a speedy colectivo taxi that bypassed the quaint villages and cut the ride time in half heading home on a hot afternoon when our hammocks beckoned.
Afternoons in Yucatan are made for hammocks.
We are still heading to Mani so stay tuned for more adventure excursions of exploration in Yucatan.

We are snow birders staying the winter in Progreso. A few days ago we went to Mayapan. It was lovely with less than 10 tourists there. We passed through Techo and were so impressed that we want to make it a special day trip there. Thanks for posting.