MAXCANU /OXKINTOC BICYCLE TOUR
Jane and I left the house at 5:30 AM riding our 20 inch folding bikes and an hour later we were departing Mérida aboard a local bus heading southwest 60 kilometers across the low flat semi-arid scrub brush country of Yucatán to the colonial town of Maxcanu situated at the beginning of the Puuc hills on the border with the neighboring state of Campeche.
This diminutive town seldom visited by tourists seems to be lost in a time-warp far back in the past century. Maxcanu is one of countless Yucatán villages still maintaining the traditional palapa thatched roof homes of the ancient Maya that are still widely in use as they have been for many millennium.
As recently as the early 1970s over half of the population of Yucatán lived in these traditional style thatched roof homes called “palapas” or “casa de paja”.
A special tranquility is maintained in this place where bicycles and the three wheeled tricycle taxis quietly outnumber motor vehicles.
We struck off on our folding bikes to get the general lay-of-the-land and begin our photo-op country tour when we mysteriously found ourselves on the road to Oxkintoc…our map was not an accurate depiction of the roads. As it turned out we were in luck because we did not have to go out on the main road to reach our destination…every day in Mexico is an adventure.
The following story is presented with captioned photos; 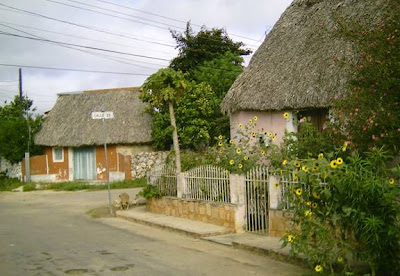 It is quiet, quaint and serene on the side streets of Maxcanu but at the zócalo where we had our breakfast the resonating echoes barked out from an obnoxious ear-splitting brain- rattling megaphone grated on our nerves with repetitious tacky boom-boom-boom music interspersed with useless annoying repetitively screechy advertisements. 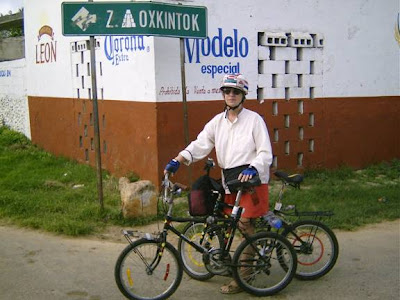 With our fourteen speed home made folding bikes, Jane and I luckily find ourselves on the route to our end destination of Oxkintoc.
(Spelling continuity in this part of Mexico is totally non-conforming from maps to road signs to tour books so you have to do your own detective work and be mentally flexible.) 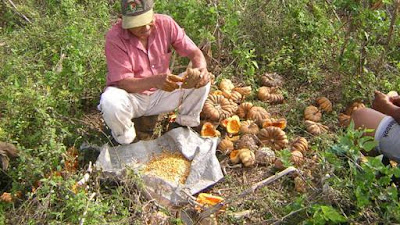 This milpa in the country on the way to Oxkintoc is where corn, (maize) and calabaza is grown. From ancient times the Maya have sustained themselves with the perfect food group consisting of corn, beans and calabaza.

This low impact farming is very labor intensive. Using slash and burn agriculture as his ancestors have done over the past several thousand years this farmer planted his calabaza at the beginning of the rainy season and now harvests the fruits of his labor. 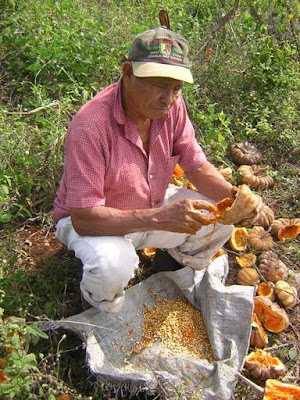 The seeds are collected and dried and then used in the preparation of a local Mayan dish called “siquilpac”. This is a flavorful nutritious dish with the ground seeds mixed with diced tomatoes, onions and cilantro and served cold and eaten with tortillas or tostados.
(The spelling in Yucatán of almost everything that originated in the Mayan language and was translated to Spanish has no set spelling standards or continuity.)
One interesting piece of wisdom we gleaned from these dirt-poor farmers was that that there was a big bank in town full of money that you couldn’t eat, but even though their crop had little monetary value at 25 pesos per kilo, they could at least eat it.

These are the Mayan ruins of Oxkintoc that were visited and vividly described by the famous explorer and excellent story teller; author John L. Stephens in 1840, INCIDENTS OF TRAVEL IN YUCATÁN. Amazingly the two volume books are still in print and selling well to this day. We highly recommend them to anybody even remotely interested in Mayan, Yucatecan or American history to read and enjoy.
(See the end note of this story for an excerpt from these incredible volumes.)
We have the place to ourselves this A.M.

Seldom visited and lightly excavated these mysterious ruins give haunting sensations of the Mayan civilization that flourished here for several thousand years.
That these ruins survived the inquisition crazed conquistadors who zealously enslaved the indigenous Mayas forcing them to pull down temples such as these and then construct cathedrals and monasteries in their place, which is so common a sight across all of Mexico. Every time we gaze upon a Mexican church we are saddened by the terrible trail of tears that fell upon this land of ancient cultural individualism. 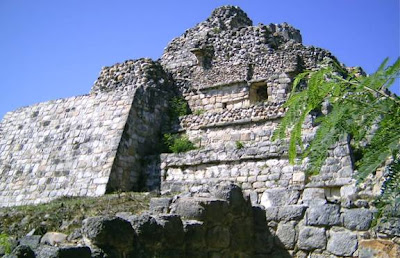 Unique to this sight are the many extensive chambers known as a labyrinth that were measured, explored and described by Stephens in his 1840 visit and subsequent books. 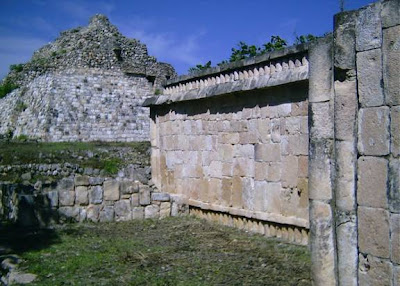 No standard form of construction is evident in this photo of pyramid, wall and building that may all have vastly different time periods. 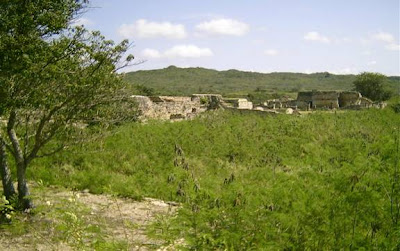 We have this pristine end of the world to ourselves, a reward of an early start. 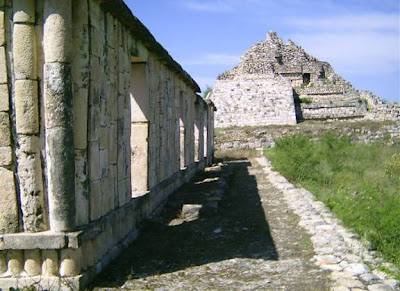 Nearly forgotten and seldom visited this lonely place did not suffer the fate of so many Mayan temples that were pulled down and re-cycled into cathedrals. 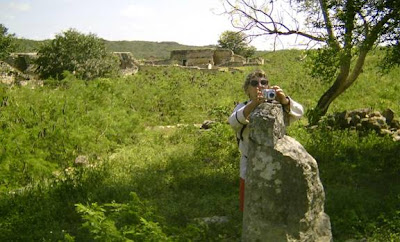 This Puuc hill region of Yucatán is sparsely populated and unbelievably tranquil. 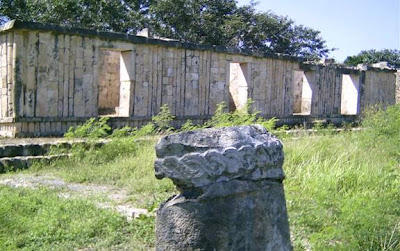 Though these ruins still stand after nearly five hundred years of abandonment they have been unmercifully picked of any interesting artifacts worth the effort of carrying off. 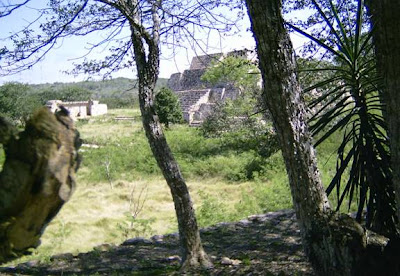 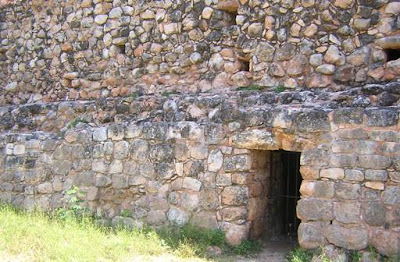 El Laberinto or the labyrinth so named by John L. Stephens in 1840 when he explored these rare expansive inner chambers and colorfully described his unusual encounter with the local populace who were direct descendants of the original builders. 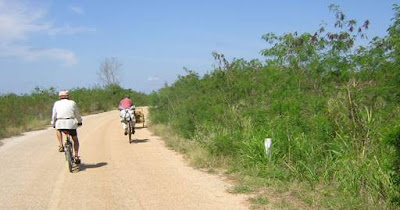 This is what traffic looked like on the road heading back to Maxcanu. Our bicycle gearing makes our little folding bikes keep ahead of the local competition. 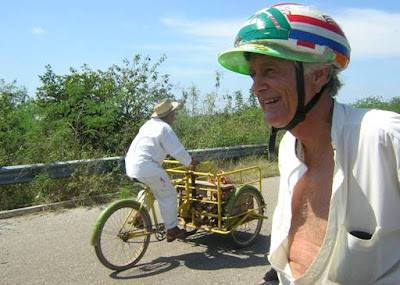 The man on the tricycle wears typical white long cotton clothing and sandals of the “campesino” or country farm worker typical of Yucatán. This was universal attire just a few years ago. 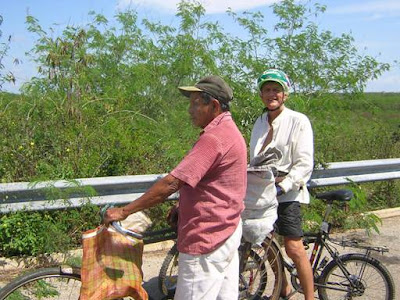 We stop to chat with the man that had been harvesting his calabaza seeds and you will see the meager results of his mornings efforts in the white bag on the back of his bicycle. 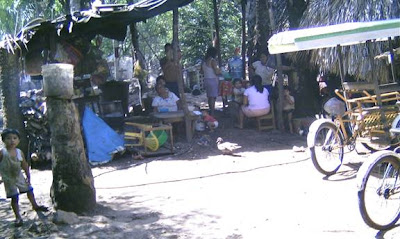 Back in town huge families live in open air compounds like this typical tropical shaded living room in the suburbs of Maxcanu. 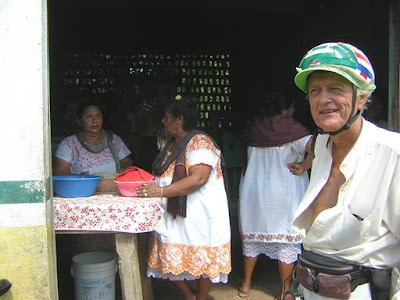 At the neighborhood molino women bring in their cooked whole corn to be ground into masa and made into tortillas. Conversation and town gossip are the by-products. Jane and I have become alert to the sound of the molino as we bike through the small towns and villages always stopping to by a couple hundred grams of the delightfully fresh hot tortillas still steaming out of the machine. 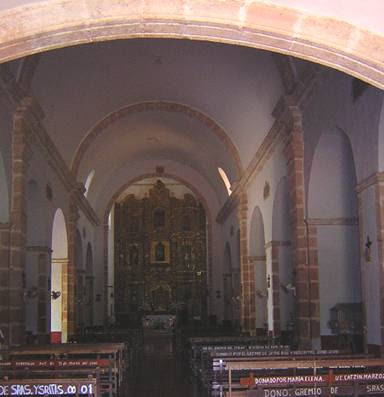 A Mayan temple once stood here but is long forgotten replaced by this. 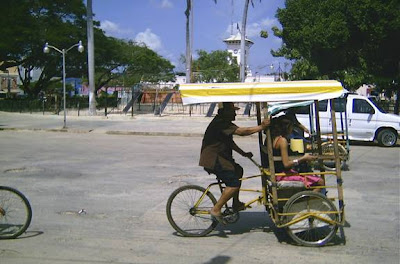 Noon in the zócalo plaza is busier but quieter than the early morning with its megaphone blasting. 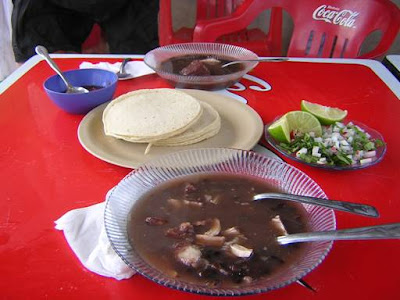 Puerco and frijol (pork and black beans) is tastily prepared and amply served at this reasonable market restaurant. 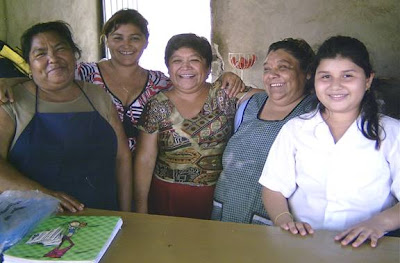 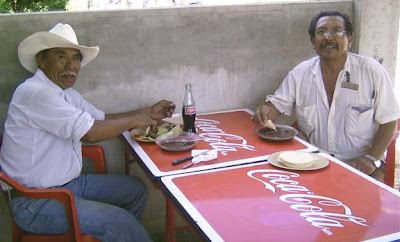 No glitter and glitz just honest food bring in the hard working and hungry towns folk to get fed-up!

We loaded our fold-up bicycles into the cargo hold of the bus to Mérida and leaned back to dream a dream of our days adventures as we rolled the 60 kilometers back home after thoroughly enjoying another fun filled day trip. February 26, 2007

An excerpt from the book;
INCIDENTS OF TRAVEL IN YUCATÁN BY JOHN L. STEPHENS