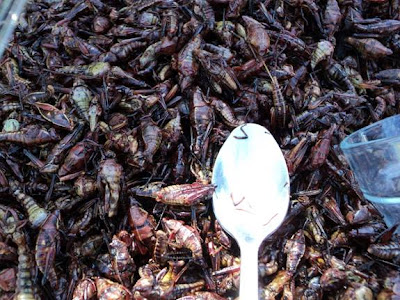 
Yes, Jane and I sampled them and pronounced them edible.


They are exactly what they look like:  insects. Fried crispy and salted, they are available for fifteen Mexican pesos a cup. The flavor is distinct. I could make a meal of them if driven by hunger. 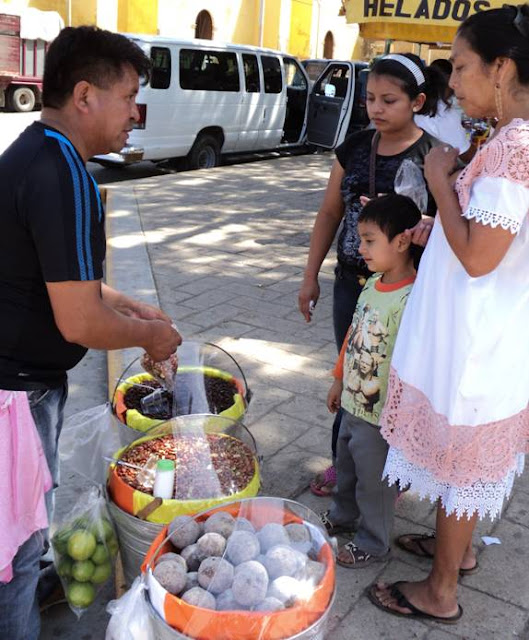 On a recent visit to Oxkutzcab, chapulines were for sale in the central plaza. The furthest bucket contains chapulines, next roasted peanuts mixed with squash seeds, and closest are mandarin oranges coated with a thick layer of sugar.  Lime juice, salt, and hot sauce are offered at no extra charge.


According to Wikipedia, chapulines, plural for chapulín, are grasshoppers that are commonly eaten in certain areas of Mexico. The term is specific to Mexico and is from the Natuatl, the indigenous language of that region.


They are collected only at certain times of year (from their hatching in early May through the late summer/early autumn). After being thoroughly cleaned and washed, they are toasted on a comal (clay cooking surface) with garlic, lime juice and salt containing extract of agave worms, lending a sour-spicy-salty taste to the finished product. Sometimes the grasshoppers are also toasted with chili, although it can be used to cover up for stale chapulines.


One of the regions of Mexico where chapulines are most widely consumed is Oaxaca where they are sold as snacks at local sports events and are becoming a revival among foodies. It's debated how long chapulines have been a food source in Oaxaca. There is one reference to grasshoppers that are eaten in early records of the Spanish conquest, in early to mid 16th century.


Chapulines must be very well cooked prior to consumption, because, as with other grasshoppers, they may carry nematodes that can infest humans.


Read more about Mexico’s fascinating world of exotic eating experiences that tourists miss most in the books: Yucatán’s Magic, Mérida Side Trips and Yucatan for Travelers – Side Trips: Valladolid to Tulum, available in paperback and digital editions worldwide.

I've only eaten these once, in Oaxaca, and enjoyed them so much. I was unable to get to the Oaxacan festival here in Merida last weekend. I wonder if they were served there. (Maybe next year.)