Rómulo Rozois in the news in Mérida.  I have written quite a few posts and articles about him over the last couple of years.   Below I am republishing part of a blog that pertains to his work in Ticul. 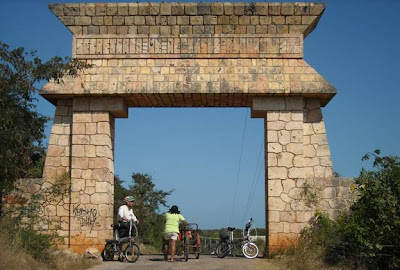 Carved into a corner stone of the Ticul Mayan arch is the name of the stone carver, Rómulo Rozo, who left his distinctive creations all across Mexico.
The distinctive pink stone of this arch and the “Monumento de la Patria” (Monument to the history of Mexico) on the prestigious Paseo de Montejo Boulevard in Mérida came from a quarry on an adjacent hilltop on the road south to Santa Elena. The stone for the monument was transported to Mérida on the old narrow gauge railway train. 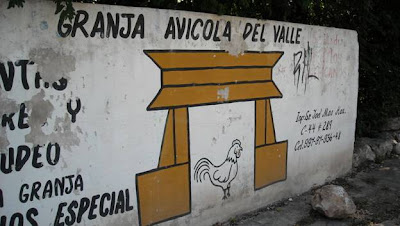 The Ticul Mayan arch is so famous it is plagiarized in wall painted advertisements. 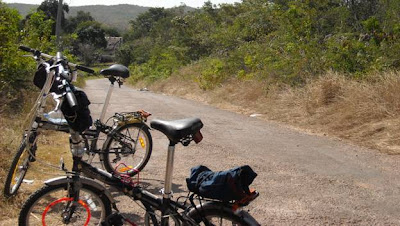 A view looking away from the Ticul Mayan arch and into the rolling hills of the Puuc region will give you some idea of the narrow back roads and isolated open spaces of this semi-arid tropical forest region of northwestern Yucatán. 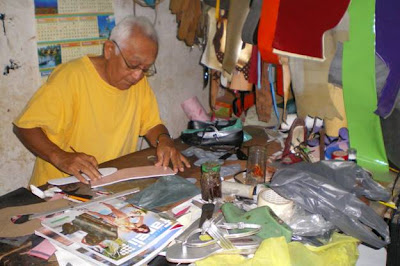 At age seventy-five Arturo Gutierrez actively works in his shoe manufacturing business and even made a splendid repair of Jane’s shoes while we waited. The remarkable thing about Arturo is that he as a little boy recalled Rómulo Rozo the famous stone sculptor, how he dressed and his stone cutting shop where he trained area men into the sculpting trade. Most amazing of all is the fact that the stone cutting shop of Rómulo Rozo was in this very same building. 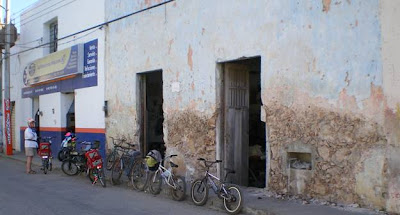 This is the shoe manufacturing shop of Arturo Gutierrez where Rómulo Rozo previously did his stone cutting. The bicycles belong to the employees of the shoe shop. 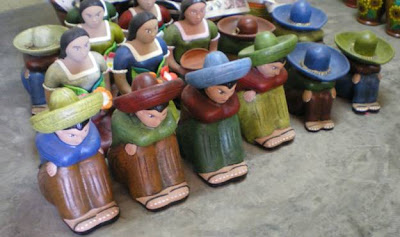 One of Rómulo Rozo’s most widely plagiarized works of art is this little figure that they refer to here as “Pancho”. The sculptor originally named it El Pensamiento or “The Thinker”. 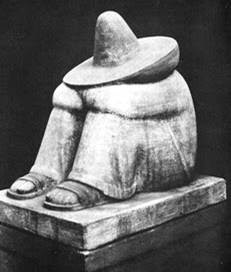 Above: El Pensamiento photo from Wikipedia
Sculpture by Rómulo Rozo displayed in the Museum of Art in La Paz, Bolivia.This is the image that was plagiarized after it was shown in an exhibition in the National Library in Mexico City in 1932.When it was on exhibition, somebody placed a bottle of tequila in front of it, took a photo and it was widely circulated in newspapers around the world as the drunken or sleeping Mexican…an image still thought of today. 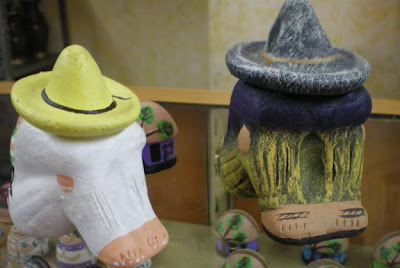 The variety of paint jobs and size of “Pancho” seen endless…all the shops sell them.

For more of his work in Mérida, check out a couple of links to my website:
Monument in Mérida Cemetery         Rómulo Rozo 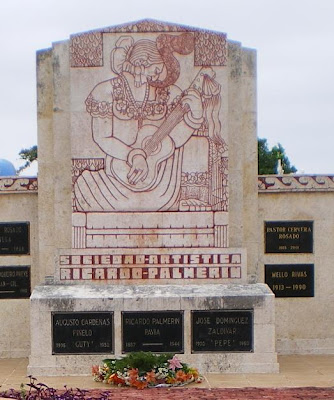 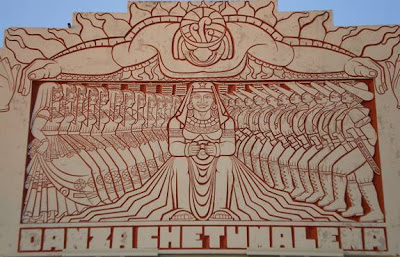 A close up look at Rómulo Rozo’s creative stone relief work in the amphitheater in Chetumal.
For more of his work in Chetumal:    http://www.bicycleyucatan.com/chetumal
Posted by JJ Yucatan at 4:14 AM

Such beautiful photos of the work of a wonderful sculptor. Thanks for a great post.