Martyrs of Chicago and May Day.

On May 3, 1886 after a strike protesting for an eight hour working day held at the McCormick reaper works in Chicago, several workmen were killed by police.

The next day, May 4, 1886, at a rally held in support of striking workers in Haymarket

Square, an unknown person hurled a bomb into the crowd as the police were breaking up the public meeting.
The international anarchists took credit for the bomb. The anarchist’s objective was to protest against police violence. The bomb killed eight police and injured twenty-seven other people.
Eight protesters at the meeting were arrested, charged and four were hanged.
The workers rights protesters that were charged became known as The Martyrs of Chicago.
The Haymarket affair is generally considered to have been an important influence on the origin of international May Day observances for workers.  May Day is celebrated through out the world as an official worker holiday. May Day is also a traditional holiday in many cultures.
In 1958 U.S. President Dwight D. Eisenhower proclaimed May 1, which was previously known as May Day or International Workers' Day, as Law Day. Eisenhower considered groups associated with workers rights as communists.
In Mexico, El Dia del Trabajo or International Workers Day  is a celebrated event. The Martyrs of Chicago are still remembered for their efforts in behalf of workers.
In the Yucatán port city of Progreso, the henequen workers union has built a school commemorating The Martyrs of Chicago. 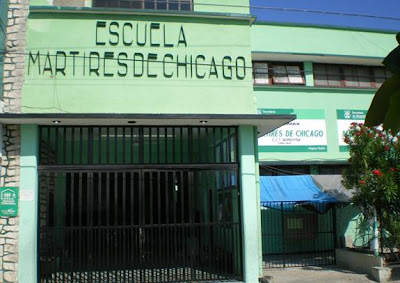