CHETUMAL, IN SEARCH OF GONZALO GUERRERO, Father of the First Mestizo

(In Yucatán, Mexico, a mestizo is a person of mixed Spanish and Mayan parentage.) 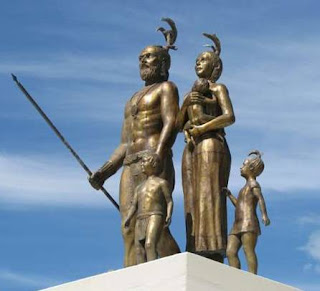 Monument in Chetumal, Quintana Roo dedicated to Gonzalo Guerrero, his wife Zazil Ha and their children


This fascinating story actually begins with the birth of Gonzalo Guerrero back in the early 1470’s at Palos, Andalusia, Spain.
Trained as a military combatant he fought to drive the last of the Moors out of the Iberian Peninsula by 1492 ending eight centuries of Islamic occupation. Then he took up his next position of soldier/sailor on Columbus’s first ocean crossing expedition aboard the small open carvel vessel, Niña.
This soldier of fortune’s story did not reappear in the annals of history again until 1511. Gonzalo set sail in good weather from the Gulf of Darien on the Colombian coast of South America north bound with looted treasure and slaves.
What happened next is one of the worst nightmare stories that could happen to anyone.
Forty year old Gonzalo was plummeted into the sea aboard a makeshift raft with no food or water, one of eighteen men and two women to survive the wrath of a hurricane that dismasted his ship and sunk it.
Only eight lived to make landfall, having to resort to cannibalism in order to survive.
Salvation did not happen. The group of eight survivors were apprehended and enslaved by their Mayan Cocom captors on the Yucatán coast.
Four of these survivors were sacrificed and eaten immediately. The others were caged and fattened for a future festival of flesh feasting. The fattening gave the remaining four the strength to escape to the Tutul Xiues tribe of Mayas who were enemies of the Cocom’s.

(An interesting fact of logistic history; in the recorded accounts of the first encounters of these Europeans arrival in Yucatán it was noted that hammocks were in use by the natives.)


Tutul Xiues made slaves of these surviving Spaniards. Due to extreme hard work and exhaustion only Gonzalo Guerrero and Geronimo de Aguilar survived.
Geronimo de Aguilar kept his religion and cultural ways but Gonzalo Guerrero took up the Mayan ways and became a military advisor and trainer teaching the Maya the combat tactics of the Spanish.  It has been speculated that this Spanish combat training gave the Mayan people of the eastern jungle part of the Yucatán peninsula the ability to drive out the conquistadors. The Mayan of the Quintana Roo region, (eastern jungle) have never been completely subdued and it wasn’t until Méxican federal forces put down the protracted Caste War in the early 1900’s that this area became a territorial part of México.
Gonzalo Guerrero left a lasting legacy with his newly adopted countrymen.
Next Gonzalo kills an alligator attacking his master and gains his freedom from slavery. He then engaged in ritual mutilation and tattooing that included piercing his ears and cheeks. These acts assimilated him into the Mayan way of life.
Gonzalo next took a Mayan princess named Zazil Ha as his wife and was given the temples of Ichpaatún north of Chetumal, presently designated on maps as Oxtankah.
Chetumal Bay has been a major route of commerce since the days of the ancient Maya because it linked sea-going trade routes to rivers incorporating man-made canals. Lamanai is one of the three most prominent Mayan settlements that remained continuously active through the post-classic period and even after European arrival that is linked by river/canal to Chetumal Bay.
In 1519 Hernán Cortez arrived at the island of Cozumel and attempted to rescue the two Spanish survivors, Geronimo de Aquilar and Gonzalo Guerrero from the Maya.
Gonzalo Guerrero replies; “I married a Mayan woman, have three children, am chief and captain, taken their ways with tattoos, pierced ears and scared face…this is my place.”
Gonzalo’s daughter was rumored to have been sacrificed in the cenote at Chichén Itza to end a locust plague.
He eventually met his fate in battle against the Spanish invaders.
Geronimo de Aguilar went with Cortez and took a job as translator.
For centuries Gonzalo Guerrero was despised by the Spanish for being a traitor, defector, and renegade. He was a man, who had fought against his countrymen, turned his back on his land of birth, society, renounced his faith and denied Christ.
After the independence of Mexico a change took place; strangely some Mexicans descended from the conquerors now began to feel a real passion for the Mayan culture. From the Maya one name that symbolizes the struggle in opposition to colonial imperialist power and a struggle for freedom was Gonzalo Guerrero.
Ultimately Guerrero would go from villain to hero and from traitor to a champion of freedom.
The Mayan ruins and Church at Oxtankah in the jungle north of Chetumal, Quintana Roo, Mexico have been restored and memorialize this extraordinary man and his wife, Zazil Ha, the parents of the first mestizo. An adjacent lagoon in the area of the Oxtankah ruins near Bacalar bears his name. 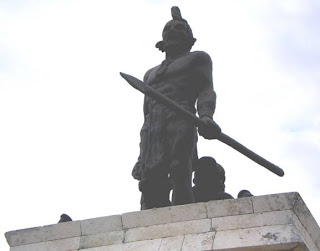 On the prestigious Paseo de Montejo in Mérida a monument now commemorates his memory. Donated to the city of Mérida by the founder of Akumal, Pablo Bush Romero who was also the president of the Explorers Club of México this bronze monument sculpted by Raul Ayala is perched atop a stone pedestal at the north end of Paseo de Montejo. 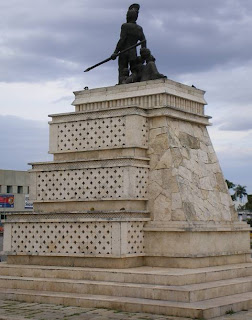 Remarkably this monument to one of the most noteworthy Spaniards to ever venture to the New World, Gonzalo Guerrero, his wife, Zazil Ha and their three children sits between eight lanes of bustling traffic.
There is no sign of recognition or plaque of explanation and few people if any that pass here are ever aware of the incredibly fascinating story behind this first Spaniard to integrate into Yucatán. 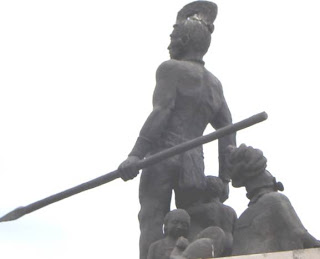 The symbolic sculpture of Gonzalo Guerrero attired in his Mayan clothing with his wife Zazil Ha behind cradling one of his infant children while another of his three mestizo children plays with a Spanish conquistador war helmet tells much of this epic story. 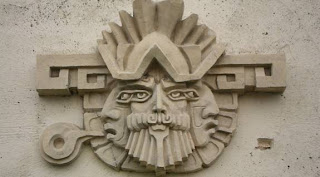 This sculpture of Gonzalo Guerrero is a part of the monument in Chetumal dedicated to the Cradle of the Mestizo.