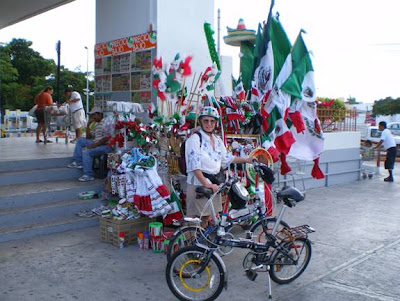 Our thirty day trip to behind the wall began by bicycle and bus to Cancun where this photo of Jane was taken amidst a dazzling array of Mexican patriotic nationalistic memorabilia for the upcoming Mexican Independence Day celebration in September. This is a typical spectacle to be found across all of Mexico this time of year.
Our inspiration and motivation for this special trip was primarily to collect, transcribe, scan and digitize historical information pertaining to the life and times of Jane’s father the late Edwin Pearson and also to visit with family and friends. 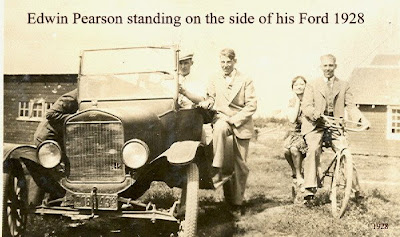 From Cancun we would fly on a charter airline called Sun Country to Dallas and then on to Minneapolis, Minnesota. Jane and I were pleasantly surprised at the friendly, courteous and attentive service we received by all of this airlines employees.
By contrast we were amazed at the excessive level of paranoia that has gripped America when we passed through immigration at Dallas. It had been seven years since we spent time in America and we were not quite prepared for the state of fear that gripped the country…it could be that there is now substantial reason.
We made this trip with the two folding bicycles you see in the above photo and two small carry on backpacks. I should have packed warmer bicycle pants, otherwise we were adequately prepared.

This is a typical tranquil northern Wisconsin back road that we enjoyed so very much especially with the lack of traffic. The fabulous view you see is of the decent from the top of the hill that leads down to the “big lake”, Superior far off in the distance. 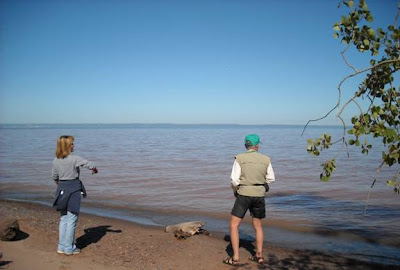 Here is the western extremity of the “big sea waters” of Lake Superior with the hills of Minnesota twenty miles across on the north shore. It is rare to find the lake this calm.
In 1972 Jane and I took departure from this place aboard our homebuilt 46 foot sailboat Dursmirg and sailed away on a fifteen year live-a-board adventure and voyage. We have a 4 volume story entitled The Travels of Dursmirg on our web-site; www.bicycleyucatan.com Volume 4, The Rogues of St. Augustine and Other Social Misfits has recently been posted. 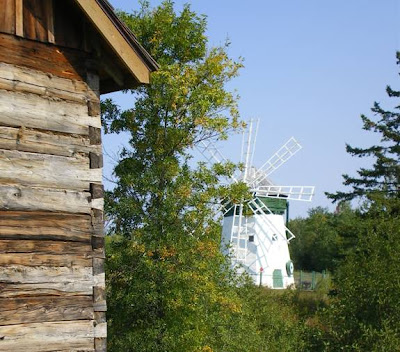 Still remaining from the pioneering days when this area was first settled in the 1880s as the timber barons clear-cut the virgin tall pine forests are these relics of that past time.

Quiet solitude and the first autumn colored leaves give a hint of the cool nights when we stoke the wood fired sauna at the home of Jane’s little brother Joel, before snoozing where the stars sparkle brightly without human competition. 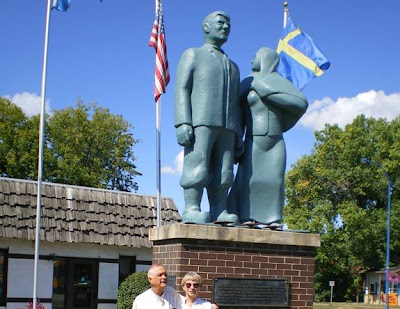 This is Lindstrom, Minnesota where the historical Swedish novelist Moberg wrote his classic books about the immigrants. 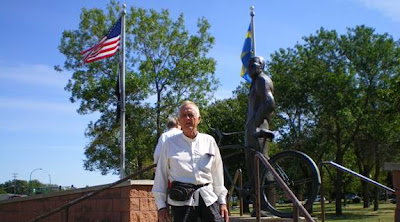 Next to Lindstrom is Chisago, Minnesota where much of Moberg’s writing about the Swedish immigrants took place and he is depicted here with his bicycle bigger than life.

This is one of many Twin City bicycle paths laid upon abandoned railroad right-of-ways, now well used and enjoyed. My brother and sister in law, Dennis and Joan Davis, above photo, rolled out the hospitality to Jane and I and made our visit more than magnificent. 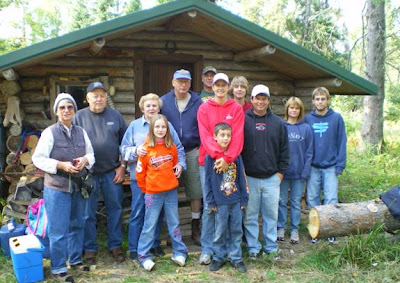 The Pearson family cabin is located at the end of a two mile forest hiking trail and is situated on forty acres of wild land abounding with deer, bear, timber wolvess and countless other north woods wildlife It is on the shore of Lake Superior.
Above Jane P, Dick, Judy P, Katie, Jim P, Joel P, Amy, Brandon, Alex, Brent, Shelly and Andy. All of the names followed with a “P” are the Pearson brothers and sisters…this is all family. 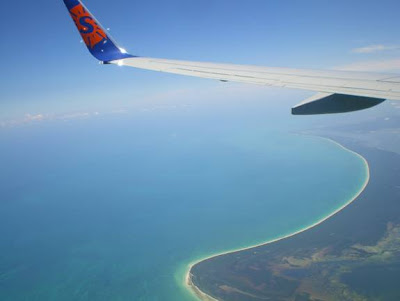 Winging our way home to Yucatan, Mexico, below is Cabo Catoche extending out into the green Gulf of Mexico. Off in the distance under the wing is Isla del Cantoy that demarks the beginning of the inky blue waters of the Caribbean Sea at the furthest northeastern point of the Yucatan peninsula. This is the tropics.
Our thirty day stay in the USA began with the news that our trip insurance company went belly-up, next our bank did the same and finally the morning we took departure the front page newspaper story was that Sun Country airlines was in financial trouble and would only issue one-half pay to the employees…later that day they filed for bankruptcy. I told Jane on the way to the airport that morning not to be too surprised if our airplane didn’t get fueled. Well, it did and we got home, all the while thinking we might be on “the last plane to paradise”.
Jane and I were amazed in America to find the “blame-game” for the nation’s financial crisis placed upon Bill Clinton, the Chinese and the Mexicans. We wondered if the importation of 21,000,000 barrels of oil a day, unprecedented military spending or corporate financial thieving might have been contributing factors.
Our trip was an unequivocal success. We secured even more historical information than we had hoped for and our visits with family and friends were just great. We only wish that we could have had even more time to enjoy the fabulous hospitality lavished upon us.
So, thanks to you all who made our lovely trip wonderful beyond description.
John M. Grimsrud
Posted by JJ Yucatan at 6:56 PM