MÉRIDA SOUTH BY BIKE ON CALLE 42

Leaving Mérida and heading south by bicycle we have found the quietest route, not necessarily the fastest, taking you through an assortment of interesting neighborhoods. Even from the north of the city you can be out past the “periferico” or rim route overpass in less than an hour poking along at a leisurely pace. There are only five stop lights the entire length of calle 42, but scores of “topes”, speed bumps, which we easily glide over on our slow moving bikes. 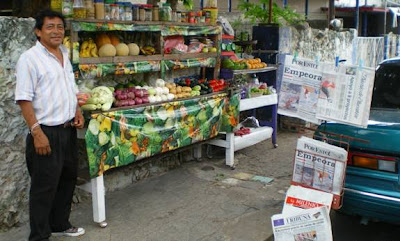 Calle 42 may not be an interesting trip by car but by bicycle neat shopping places like this simple little sidewalk shop will conveniently fill your traveling needs. 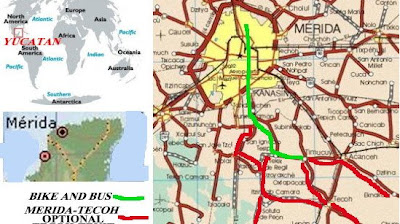 One hour of biking will take you out of the city and two more hours to Acanceh or Tecoh. Convenient return transportation is no problem with folding bicycles from any of the cities you see on the above map. The optional (red) routes are all on quiet roads. 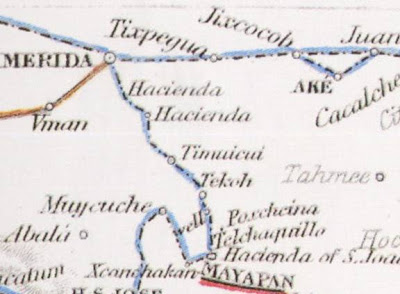 This is a very historical map reproduced from a British Admiralty chart dating 1840. It was used by John L. Stephens on his epic expedition of exploration when he and his partner Catherwood journeyed across Yucatán visiting the Mayan ruins and making priceless sketches of the peninsula. The classic book Stephens wrote, Incidents of Travel in Yucatan is still in print and we consider it one of our all-time favorites and a must read.
This 1840 chart was three hundred years after the Spanish conquest and just a few years before the catastrophic Caste War broke out. John L. Stephens’s route is overdrawn in blue and the bold print names represent places where they made sketches. One very significant thing to be noted from the above chart is the conspicuous lack of highways and designated roads.
Remember that this was the beginning of the industrial revolution and steam power had not yet reached Yucatán.
Another interesting thing of note is the fact that the very straight roads in use at that time were built by the ancient Maya and were still in use by the Spanish who wrecked the smooth paved surfaces with their wheeled carts.
Well, believe it or not Jane and I were amazed as we made this bike tour that our excursion took us on the exact same route as John L. Stephens took one hundred and seventy years earlier. We rode the now paved ancient Mayan sacbe roads where the neatly cut side stones are still visible after countless centuries of use.
Here in John L. Stephens own words from his epic book; Incidents of Travel in Yucatan is an excerpt describing his departure from Mérida and journey south, the exact same road that Jane and I had bicycled;
Pages 65, 66, 67, 68; subject 1842 trip to Tekoh 8 leagues from Mérida.


It was our intention to resume our exploration at Uxmal, the point where we were interrupted by the illness of Mr. Catherwood. We had received intelligence, however, of the ruins of Mayapan, an ancient city which had never been visited, about eight leagues from Mérida, and but a few leagues aside from our road, by the haciendas, to Uxmal. The account which we could obtain were meager, and it was represented as completely in ruins; but, in fulfillment of our purpose we at that time entertained going to every place of which we heard any account whatever, we determined to visit this on our way to Uxmal. It was for Mayapan therefore, that we were now setting out.
Our saddles, Bridles, holsters, and pistols, being entirely different from the mountings of horsemen in that country, attracted all eyes as we rode through the streets. A friend accompanying us beyond the suburbs, and put us into a straight road, which led, without turning, to the end of the days journey. Instead of the ominous warnings we were accustom to in Central America, his parting words were, that there was no danger of robbers, or any other interruptions.
…I would remark that no map of Yucatan at all to be depended on has ever been published…
At a distance of a league we passed a fine cattle hacienda, and at twenty minutes past one reached Timucui, (on modern maps spelled Timucuy), a small village five leagues from Mérida. The village consisted of a few Indian huts, built around a large open square, and on one side was a shed for a casa real. It had no church or cura, and already we experienced a difficulty which we did not expect to encounter so soon. The population consisted entirely of Indians, who in general throughout the country speak nothing but Maya; there was not a white man in the place, nor anyone who could  speak in any tongue that we could comprehend. Fortunately, a muleteer from the interior, on his way to Mérida, had stopped to bait his mules under the shade of a large tree, and was swinging in a hammock in the casa real. He was surprised at our undertaking along a journey into the interior, seeing that we were brought to a stand at the first village from the capitol; but, finding us somewhat rational in other respects, he assisted us in procuring ramon leaves and water for our horses. His life had been passed in driving mules from a region of country called the Sierra, to the capitol; but he had heard strange stories about foreign countries, and, among others, that in El Norte a man could earn a dollar a day by his labor; but he was comforted when he learned that a real in his country was worth more to him than a dollar would be in ours; and as he interrupted to his nearly naked companions, crouching in the shade, nothing touched them so nearly as the idea of cold and frost, and spending a great portion of a day’s earnings for fuel to keep from freezing.
At three o’clock we left the hamlet, and at a little after four we saw the towers of the church of Tekoh. (On recent maps spelled Tecoh)


In the following captioned photos you will visit those haciendas and interesting seldom visited towns that we biked through following the route of Stephens and Catherwood. 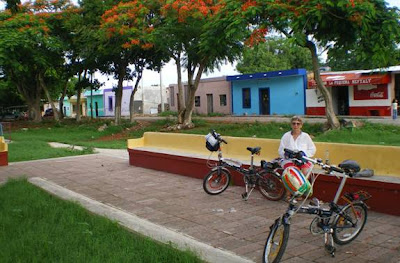 Our first stop 5 kilometers south of the periferico is the silent little Tahdzibihén park.

Haciendas and ranchos along our way are quietly reminding us of this area’s history.

The straight old Mayan sacbe road beds are still functional and used to this day and as you can see there is a conspicuous lack of motor vehicles. The city noise is left behind.

This is biker’s paradise with almost no traffic and absolutely no stop lights. 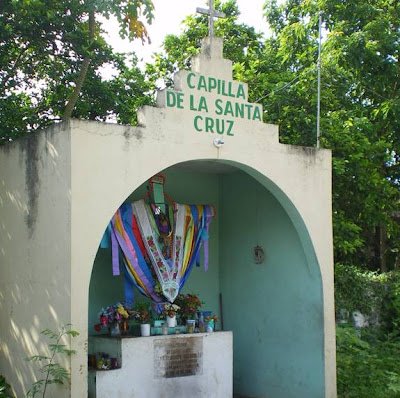 These little road side chapels are a remnant of the days of the Caste War when the Maya broke away from Spanish domination and salvaged what was left of their ancient traditional religions and commingled it with Catholicism. For more about the Cult of the Santa Cruz, check our blog: http://bicycleyucatan.blogspot.com/2008/02/cob-to-valladolid.html 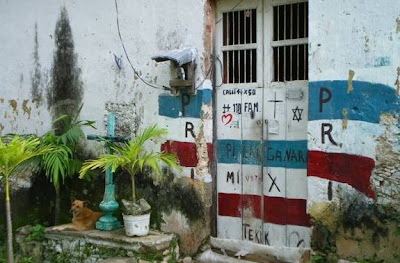 Speaking of spin-off commingled religions this house is adorned with just about every possibility to fend off evil spirits. With three types of Mayan crosses, the green, triple and stone they even have the Zionist star and for good measure the political party logo to boot! Check out the no frills 15 amp electrical service entrance next to the door. 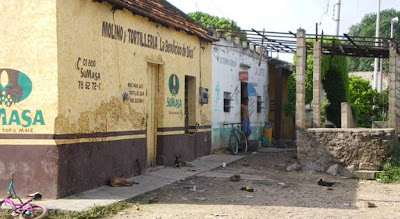 This tranquil little town of Tekik de Regil seems to be waiting for something to happen but little of consequence will take place until eleven o’clock when this molino opens to crank out hot tortillas for the mid-day meal. Yucatecan dogs do not sleep in the sun. 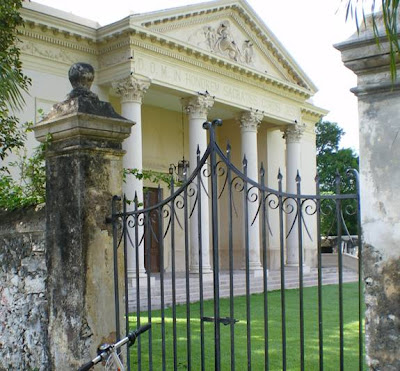 From the heyday of the henequen era in 1908 when Yucatan was awash in money for the privileged few this decadent hacienda church was put up in this poverty stricken little town. The architect that was brought in for this job also did the main concert hall in downtown Mérida.

This is the business end of the hacienda where the machinery that processed the raw product of henequen into sisal rope needed in the WWI war effort rained in untold wealth. 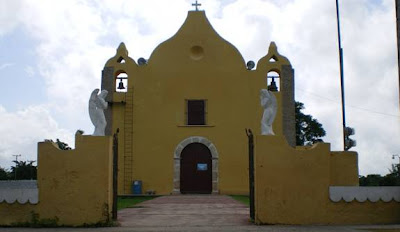 We are out in the country here at the silent diminutive town of Timucuy about six kilometers from our original planned destination of Acanceh or Tecoh. We are very flexible on these out-of-town pleasure trips and only influenced by the wind direction and heat of the day. Well, the temperature was lovely but the wind was on the nose so we naturally did what was necessary and slowed down. The net result was that when our pre-determined turn around time came at ten AM this is where we were.

After leaving Mérida it is a welcome relief to come to a place that is so laid-back that the only noise comes from chirping birds. Being bicyclers we naturally enjoy places with no pushy-shovey traffic or smoky-noisy motorized vehicles. After Mérida these nearly vehicle free towns are almost shockingly quiet. 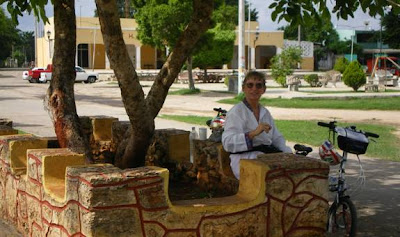 In front of the Timucuy church and across from the central town plaza Jane and I enjoy our morning iced coffee under the shade a kind old tree situated in the middle of the boulevard. This is just wonderful and well worth the effort. 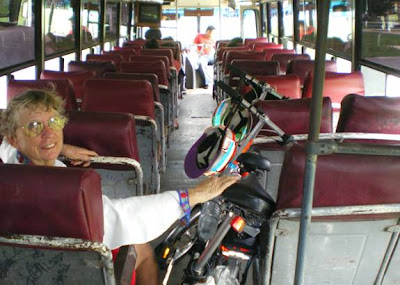 When our coffee was finished the Mérida bus pulled into the plaza, we boarded and 30 minutes later we disembarked in downtown Mérida. We were home for lunch completing a 40 kilometer bike ride and a spirited bus trip back. (The TV in the bus didn’t work.)
Posted by JJ Yucatan at 8:06 PM

I recently went south on the Calle 50 which leads to Xmatkuil. I should try the Calle 42 sometime as well. Happy new year!

Wow... love it... my original family is from this town (timucuy). They lives in the house in front of the cityhall