MAYAN SHAMANS OR SHYSTERS AND CHARLATANS?
Twenty plus years ago when Jane and I first visited Tulum it was a two tope town (a tope is a speed bump).
Stuck in my mind is a humorous little incident that occurred on our first visit. It was customary back in those days for young venders selling fruits and homemade items to stand at these topes and attempt to make a sale. The passing motorists had to slow down for the speed bumps.
As we passed one of Tulum’s two topes I remarked to Jane; “did you see that strikingly beautiful young Mayan girl selling fruit?” I didn’t buy any.
Jane advised me not to look back, but I did, wishing I hadn’t.
Glancing in my rearview mirror I saw that hauntingly beautiful Mayan princess transformed as she “shot me the bird” with both hands while sour facedly sticking out her tongue. Beauty is only skin deep!

Over the past quarter of a century we have seen little two tope Tulum transformed. It has gone from a nearly dead jungle settlement that wasn’t even a wide place in the road to a bustling boom town with supermarkets, super subdivisions, traffic lights and service roads.
The state of Quintana Roo had been a territory where no white man was safe from the beginning of the Caste War in 1847 until the 1930s. After federal troops out gunned the Maya and sent all of the captives off to Cuba as slaves President Porfirio Diaz made Quintana Roo into a national territory in 1902.
Statehood came in 1974 two years after Cancun and the Caribbean coast were discovered and being developed into a tourist destination. Before that it had been a smugglers tax free haven where clandestine fortunes were made dealing in everything from electronic gadgets to Dutch ham and cheese.
Caribbean coast tourism brought an avalanche of development beginning in Cancun in 1972. International vacationers flooded in making the Costa Maya the world’s number one tourist destination sending this last holdout of ancient Mayan culture and tradition into a faded memory.
Land grabbing flimflammers and unscripted developers exploited labor at slave wages and didn’t hesitate to capitalize.
The influx of multinational capital merely served to augment the wealth of the wealthiest while simultaneously plundering Mexico’s last and largest natural eco-environment.
The buzz-words today have become; “Mayan” and “eco” for ecological that have the eager tourists lining up to squander their wealth.

The cruise ships promote blitzkrieg day trips with caravan loads of jeeps filing down jungle roads at top speed thirty at a time seeing nothing but the dust obliterated back of the jeep in front of them. Here a small group leaves Tulum headed for the Caribbean beach town of Punta Allen at the end of a dirt road. 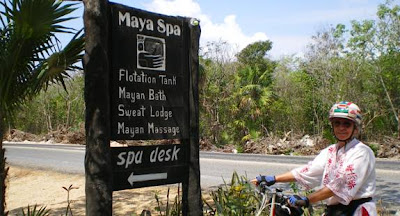 On the Caribbean coast south of Tulum is the beach front resort of Copal named after the Mayan shaman’s ceremonial smoke producing tree pitch. Believe it or not we haven’t seen anything other than some of the maintenance people that are in anyway even remotely Mayan. The massage lady is Swedish. 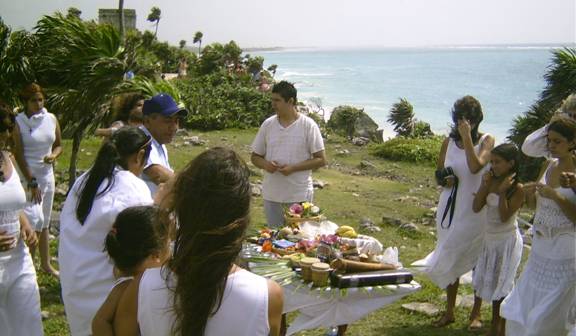 This Mayan baptism ceremony held on the grounds of the ruins of Tulum is being conducted by the shaman with the blue baseball cap. At least here the participants were Mexican; in fact they were all friends of our Mexican daughter Grisel.

This expensive Caribbean beach wedding ceremony was just a three day party made up of rich jet-setters on a fling. The white robed barefooted long gray bearded old hippie shaman of dubious origins was no more Mayan than the man in the moon. In the town of Tulum is this real Mayan park flanked by their gigantic ritualistic Ceiba trees also known as yaxche in Mayan and kapok in English. The fiber of the seed pod of this tree was used in life-preservers until the 1950s. This little unimposing park is surrounding the Maya Cruzob cross cult church and dates back to the beginning of the protracted Caste War in the 1840s. This is when no foreigners were safe to enter the region and the nearby city of Felipe Carrillo Porto then known as Chan Santa Cruz was the capitol of their Mayan territory.
Ironically the British through their territory in Belize, then British Honduras, saw an opportunity and took it. Trading guns and ammunition for exotic tropical hard woods with the Maya they were able to be a thorn in the side of the Mexicans and at the same time develop a lucrative lumber business.
When the political winds shifted and it became more profitable to do business with Mexico the shipment of arms to the Maya dried up and the Maya were doomed.
Chan Santa Cruz fell to federal troops in 1901 and the captured Mayan rebels were sold off to Cuba in slavery. Despite the crushing oppression by the invading conquers the Maya still cling to their ancient ways. 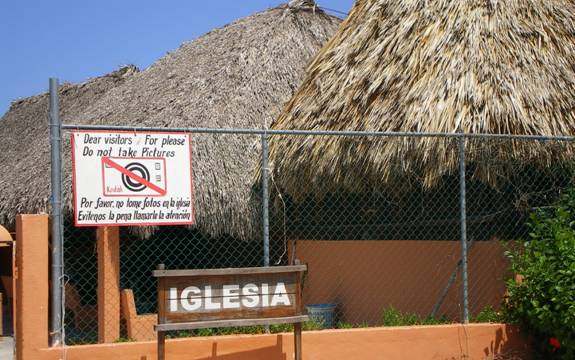 Within this humble thatched roof dwelling is the sacred Mayan Cruzob Cross altar guarded by an alternating group of true Maya, natives of this land who keep alive the language and traditions of their ancestors.  Vistors are welcome but be aware that the members of the church are serious about prohibiting the taking photos and you will be obliged to remove your shoes and light a ceremonial candle before entering the chapel. You will be expected to make a contribution. Though the above sign is in both Spanish and English, do not be surprised if you only encounter Mayan speaks within.


The Ancient Maya in Quintana Roo
In this state of Quintana Roo that is uniquely ecologically diverse with high jungle, savanna, mangrove wetlands and the second longest coral reef in the world, the Mayan people have co-existed with nature for thousands of years.
Tulum was an active part of the Mayan seagoing trade route and at the ruins of Tulum you will find that these ancient mariners actually had a sophisticated day and night range marker system to guide vessels through a break in the coral reef. They used two carefully aligned windows with firelight from behind as a beacon to guide their seagoing trade canoes through a narrow break in the coral reef. This ingenious range system is now used world wide.
South of Tulum at the Mayan ruins of Muyil or Chunyaxché, these ancient Maya dug a straight canal six kilometers long in from the bay that is still serviceable to this day.
Further evidence of their seafaring commerce can be found on the New River in Belize where channel cuts and docking stations are clearly in evidence and usable leading all the way up to the Mayan ruins of Lamanai that has the distinction of being one of the longest lasting continuously occupied of all Mayan sites.
The seafaring Mayan traders, known as the Chontal Maya, whose commerce took them as far a field as Cuba, Florida, Veracruz and many of the Caribbean islands ,originated from the home area of present day Tabasco.
These were the Chontal Maya whose descendants were the ancient Olmec with their huge trading canoes.
Handed down from these Olmec was the secret of corn cultivation together with the incredible process known as “nixtamalization”..
Corn had been cultivated since before 5000 BC. However this process known as nixtamalization developed by the Olmec whereby they boiled the corn with white lime or wood ashes and let it stand some hours to cool while softening the kernals, which made it easier to grind into smooth dough called masa. A result of this simple process yielded a product dramatically enhanced in nutritional value that provided sufficient protein for almost every diet and together with their beans, squash, avocados and other tropical fruits they went on to cultivate cacao, cotton, vanilla, harvest rubber and then had the leisure time to build their incredible civilization.
Venturing out of the huge jungle rivers that flowed down from the highlands of Guatemala the Chontal Maya from Tabasco sailed their cargo laden long canoes off to the Caribbean.
August 15th  1502 at the Island of Guanaja in the Bay Islands of Honduras  two sailing canoes forty to fifty meters in length with center covered cabins heavy laden with trading goods was apprehended by Christopher Columbus on his forth and final voyage and he became the first European to encounter the Maya of Mexico.
Christopher Columbus had limited luck in his lusty search for gold and had finally stooped to trading in human flesh.
Little did Columbus know at the time that the shipment of cacao was a valuable cargo used as currency in the New World.

Now the Swindlers
Now the swindlers that have come here supposedly to create jobs and better the lot of the natives have instead manipulated land titles, plundered the natural environment, and only exploited the Maya name to dupe vacationers. At the same time they are paying slave wages to the Maya who must enter the business establishments by the rear door.
Worst of all is the fact that now these same exploiters want to blame the Mayan for the obvious ecological degradation. It is the same old story of blame the victim.
Posted by JJ Yucatan at 8:58 PM