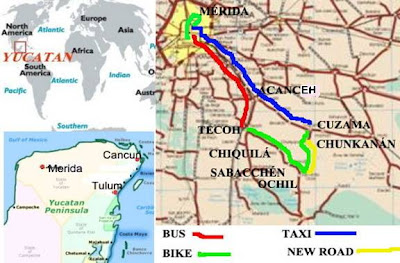 Quiet country roads through picturesque Yucatan are well worth the effort and pay back with early morning tropical birds, plus brilliant tropical flowers that change season by season sweetly perfuming the air.
Escaping Mérida’s pushy-shovey horn honking, tail-gating belligerent bumper-to-bumper neurotic drivers is like flushing the proverbial toilet…and it feels so good when it is finally gone.
Our escape Mérida bicycle trip is only a little over 30 kilometers long from Tecoh to Cuzamá but the narrow little road coupled with a brand new paved section connecting Ochil to Chunkanán, that is not even on the map makes a neat cycling loop with plenty of photo opportunities.
A suggestion to anybody interested in this trip is to do it in reverse of the way we went. The reason being that if you are inclined to dine after your bike ride as we customarily do Cuzamá has positively nothing in that department, however the town just before, Chunkanán does have a cocina economica, but we cannot attest to its quality. Tecoh on the other hand does have a rustic cocina economica that serves ample portions of wholesome savory daily specials at affordable prices.
We began this trip by bicycling seven kilometers from our home in Mérida to the bus terminal on Calle 50 and 57 in the city center.
An hour later we disembarked the bus at Tecoh with our little folding bicycles ready for the fresh air and tranquility that awaited us touring wild Yucatan outback interspersed with quaint Mayan villages and aged haciendas along our “Gruta Ruta”. 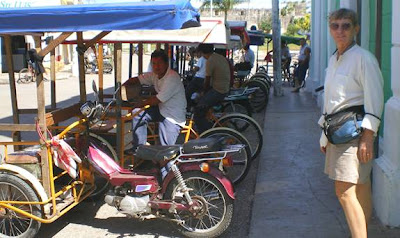 This is Tecoh where a few months of absence have seen many changes. The quiet streets filled with silent bicycles and tri-cycle taxis now have converted over to motorized taxis as you can see in this photo where the back of a motorcycle is attached to an old tri-cycle 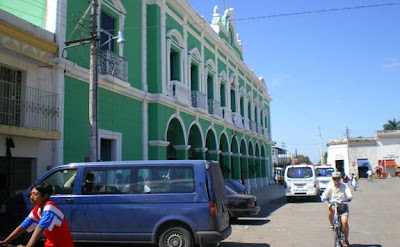 A new government required a new paint job of all things municipal and it was out with the old and in with the new. Above is the city hall complex that last year was neatly painted in a distinctive buff color…this political color change took place in every municipality over the entire state of Yucatan. Added to the environmental degradation was the ear splitting noise emitting from a new supermarket named, Super Willies, situated on the central plaza blasting the downtown into nerve rattling oblivion. 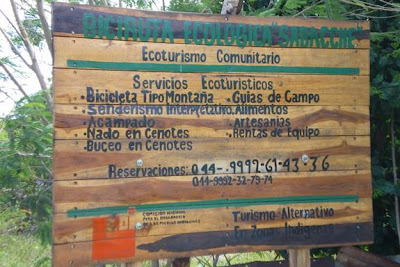 It is actually happening…at least the sign is up and that is a first step. We have yet to see the first of the bicycles or bikers participating in ecologically friendly touring of the cenotes that I jokingly named the “Gruta Ruta” because almost all of the cenotes are accompanied by caves or “grutas”. Note the spelling of the town Sabacche. On various maps you will find various spellings, such as Sabacché or Sabacchén…the standard of the industry in Mexico is that there is no standard.

This is where we make our turn to the north(left) onto the new road not yet on the map. For this insider piece of useful bicycling information we must thank our friends Basil and Alixa who conduct superb Yucatan bicycle tours. www.bikemexico.com 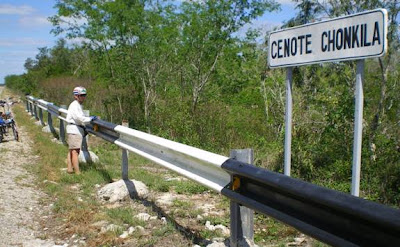 This is one of over one-hundred cenotes in this area designated on the map as; “Zona de Cenotes”.
Cenote Chonkila is very close to this new road, but most of the area cenotes require a long trek through woods by meandering foot path.
I must say here that most of these cenotes are situated in deep depressions in the rock with steep abrupt sides and no guard rails or warning signs. Cuidado mucho! “Be very careful” because the fall into unknown depths of water is only half of your problem…rescue could possibly be a very long time in coming.
On this eight kilometer stretch of new highway we may have seen one motor vehicle.
As you can see in the below photo of Jane standing on the rim of this cenote the abrupt drop of over eight meters or twenty-seven feet is straight down with nothing to hinder your decent and no way out.
Hanging from within the cave entrance on the north side of this cenote was a number of huge very active bee hives vigorously in operation. Swarms of busy bees find this location a nearly perfect environment protected from the weather and predators with a ready supply of water at hand.
The aromatic perfume of sweet honey scent was magnificently pervasive around the cenote where the multitudes of bees became aggressive enough to send Jane wheeling down the road swatting the busy little critters away while speeding into a strong headwind. She only received one sting because she was able to get them off her face as she speedily escaped.
These cenotes can be spotted by the experienced person from a great distance because around them are found tall trees watered by their long tap roots extending down into the water.
These cenotes made it possible for the ancient Mayan people to prosper and thrive in this otherwise waterless place devoid of rivers and springs. 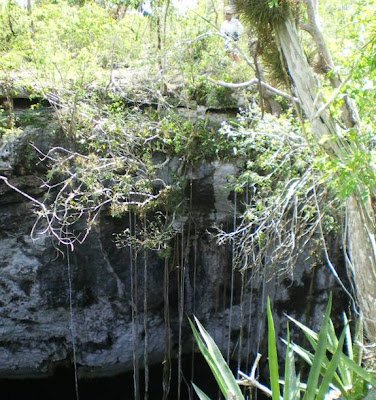 Air plants cover the surrounding trees that are sending long roots down to siphon up cenote water. Jane lends scale to the cenote size as she stands on the rim.

Chunkanán is a very special because this is one of the last places in Yucatan still actually using the old Decauville narrow gauge railroad. By the late 1800s more than 4,500 kilometers of this one foot 7½ inch wide track had been laid across the Yucatan peninsula that used horse drawn carriages. 1,000 henequen haciendas were owned by just 30 families that were made wealthy on the backs of their Mayan slaves. 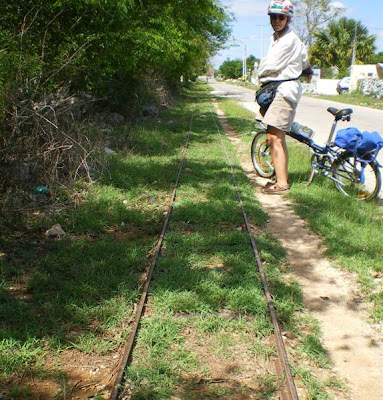 This is the narrow gauge railroad leading into Chunkanán with its well worn tow path along side the century old rail system still actively in use today.
Jane pictured with her Dahon twenty inch folding bicycle gives some prospective to the small size of the Decauville narrow gauge railroad track.
These tracks branch out to various cenotes while meandering past old haciendas and active henequen fields. This area is much the same as it was in the heyday of that industry that made Yucatan the richest state in Mexico around the time of the WWI.

Quiet downtown Chunkanán has its railway tracks leading through the neighborhoods.

The poor little old hacienda town of Chunkanán is finding a rebirth in its economy attracting busloads of tourists all the way from the port city of Progreso from tour ships to ride the antique rail system that generates enough cash to sustain the local economy.

This photo was taken in the early 1980s when Jane and I first visited Chunkanán with friends, arriving by a narrow dirt road before tourism became an industry here. What made this trip memorable besides our visit to a cenote with a deadly dangerous crumbling staircase was our race with a two meter, six and a half foot long rattlesnake, cascabel. As we rattled along at a fast horse trot the huge fat snake confined by a stone wall parallel to the track was actually slithering over the rough terrain faster than we were traveling. 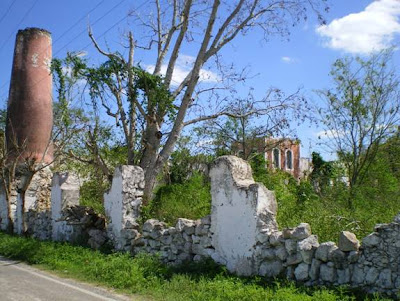 Like a page out of the last century little Chunkanán reflects images of a time in Yucatan history when hacienda life was a prospering enterprise.

Gliding through the city center a horse drawn cart clanks rapidly along the narrow Decauville railroad tracks that were installed here back in the late 1800s and are still being actively pressed into service.
This is a small glimpse back into the unhurried past before the days of a motorized world when the horse set the speed for travel. 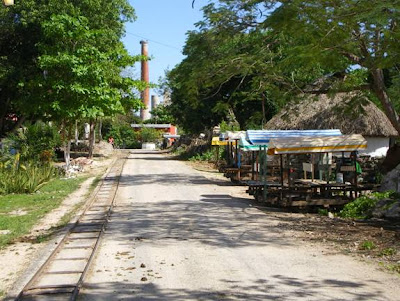 This is one of the many railroad spurs traversing quaint little Chunkanán. 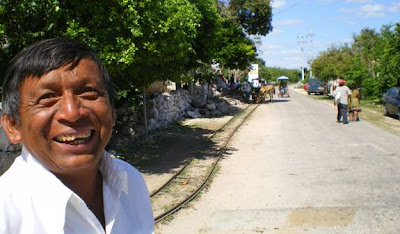 From his office here on the street, the boss or “jefe” of the Chunkanán rail service, Bolas, busily dispatches the one car horse drawn carriages on tours ranging from half hour up to three hour long guided trips. Visiting customers arrive by tri-cycle taxi from Cuzamá, a distance of four kilometers on a very quiet little paved road.

Here comes one of those little one person powered tri-cycle taxis from Cuzamá.

In Cuzamá this road sign directs tourists to their number one attraction…cenotes. 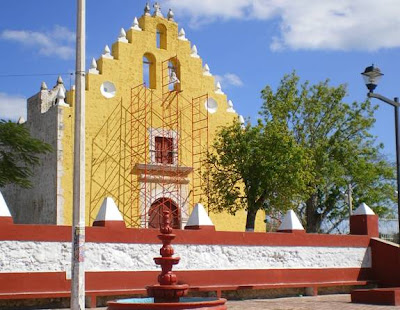 Cuzamá has nearly nothing to offer in the way of shopping or dining but it is a connecting point with cross-country buses and colectivo taxis to Mérida. 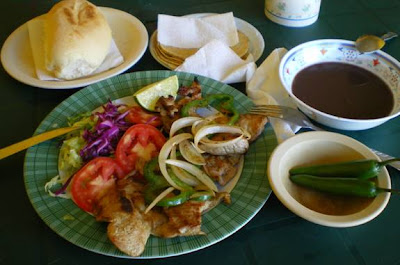 Mérida might be filled with pushy-shovey horn honking, tail-gating belligerent bumper-to-bumper neurotic drivers but dining is no problem.
When we arrived at this cocina economica, Las Delicias de La Abuela on Calle 52 north at 41 and 43 it was nearly closing time and we were the last customers of the day.
This is Yucatecan style thinly sliced and brazier fried pork that makes a scrumptious meal that I stuff into tortillas yielding tantalizing tacos. I soak up the thin bean soup with the light French bread. The above meal set us back $30 pesos or three dollars and we got fed-up.
The day wasn’t complete without a stop at our favorite coffee shop, Caffé Latté in Itzimna on the way home for a iced coffee frappe…Our bicycles seem to run best when charged up on coffee beans. 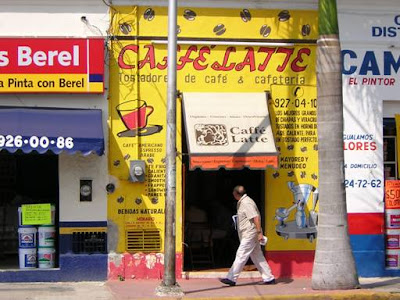