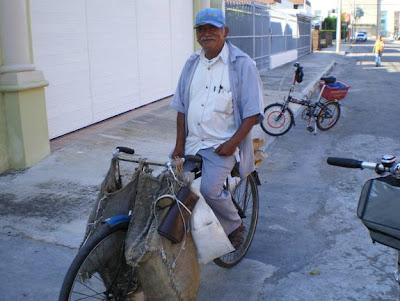 Each day his delivery of 175 newspapers takes him as far north as the Grand Plaza area, eight kilometers north.
Still smiling, seventy-one year old Eligio has faithfully made his rounds for the past fifty-two years.
Amazingly, he has only worn out two bicycles in the process and not burned a single drop of gasoline.
Congratulations to one of Yucatán’s most ecologically friendly citizens, Eligio Chi Perez.
Posted by JJ Yucatan at 9:18 PM 1 comment: 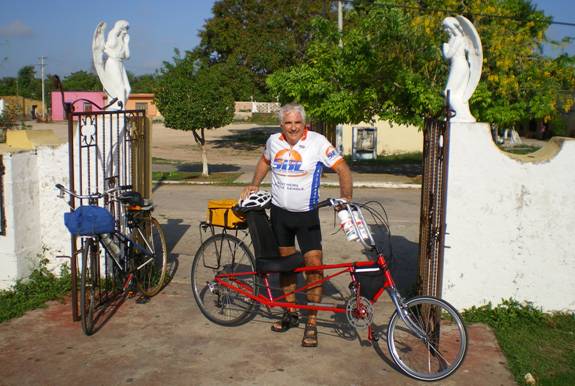 An early morning pit stop for a snack and hydration in the tranquil little town of Timucuy finds Ken Scott with his high-tech go-fast recumbent bicycle.   This is angel gate at the entrance to an old colonial style mamposteria church. Fresh air and tranquility abound. 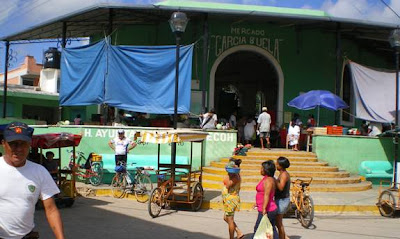 At the peaceful little town of Tecoh where motor vehicles are scarce and bicycles dominate the quiet clean unhurried streets, we took our morning coffee break in the shady central plaza. Ken fits in with the people powered bicycles and tricycles at the municipal market.
After cycling out of Mérida at 6 AM south on Calle 42, we completed our leisurely fifty kilometer back road tour by 11 AM in the picturesque city of Acanceh.
This gem of historical structural monuments of the past contains several Mayan temples.
Interspersed throughout the city are Spanish colonial buildings unchanged over the centuries. 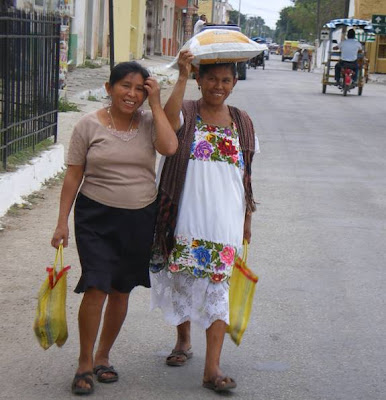 Above the two ladies are returning from the market. One dressed in western attire known as catrina style and the other lady in the traditional Mayan hand embroidered dress known as huipil. All speak the Mayan language and most also speak Spanish.
Note the conspicuous lack of motor vehicles, and this is the main street.

A church and chapel sit nestled amongst the ancient Mayan temples in the city center of Acanceh. Those temples provided the materials to build not only the church and chapel but the rest of the town buildings. 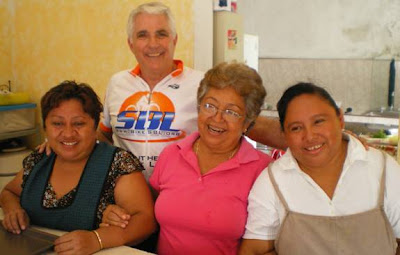 It is turn around time. A happy and satisfied Ken Scott is fresh as a daisy after our lovely 50 kilometer back road bike ride.Here he is pictured with the jovial kitchen workers at the cocina-economica where we stuffed ourselves on the generous portions of traditional Mayan style cooking.
This restaurant is adjacent to the bus terminal on the central plaza and buses and colectivo taxis depart for Mérida every few minutes.

For maps and more information on cycling on Calle 42, visit our website at: http://www.bicycleyucatan.com/Calle42.html

Postscript: John L. Stephens in his epic book; Incidents of Travel in Yucatán,  describes his departure from Mérida and journey south on the same road that Ken and I traveled to Timucuy and Tecoh.
See pages 65, 66, 67, 68; subject 1842 trip to Tekoh 8 leagues from Mérida.
Posted by JJ Yucatan at 7:46 PM No comments: